Foreword: I'm quite excited to see the first professional Akabei Soft2 work after their doujin past as Akabei Soft. I'm mostly interested in the initial release of the game, so review will be based on that. I'll also compare initial release with the remake Enkan no Kizuna.
VNDB: https://vndb.org/v85
Youtube: https://www.youtube.com/watch?v=AOJQFOpc5cs&list=PLs4Gp5VU4Fv93uWlEWyCml-A4kSkxsz4E 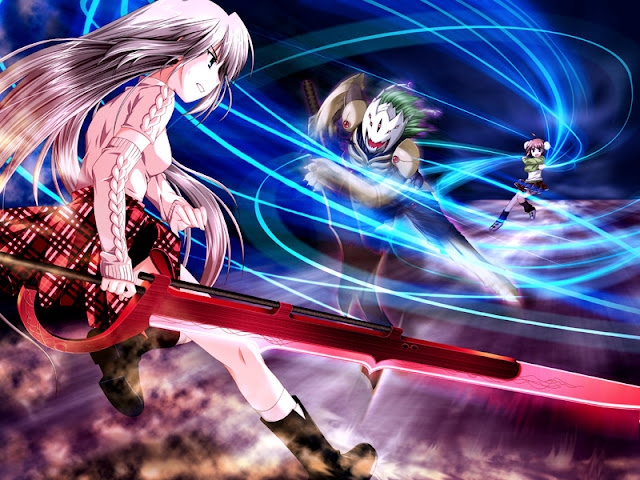 Synopsis: Touma busily lives everyday with Kasumi and Nami. One day, they receive an offer. That is to exorcize a monster. And they go hunting at night as usual. But, the monster is too tough to beat, and Touma and Kasumi get injured. Nami tries to beat it up by herself to protect Touma and Kasumi, but she is defeated...

The evaluation actually changed several times during playthrough. At first it was so-so with the ordinary SOL scenes after the prologue. Then by the end of Kasumi route there's a huge twist that fascinated me enough to consider it a masterpiece for a short time. But in the end I was not persuaded by heroes' motivation and the whole resolution. The absolute passiveness of protagonist Touma also gave a huge dent to the evaluation. 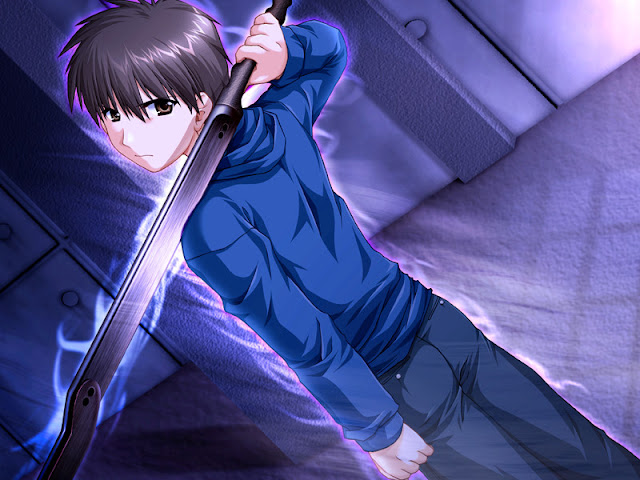 The synopsis retells the quite long prologue of the game, so it's pretty much impossible to conceal the fact that Nami is not just defeated by the monster. She is also raped, delivered multiple piercing and tear wounds and then eaten alive limb by limb. It's the most emotional scene of the game that determines the whole flow of the game, so this fact must be stated absolutely clearly to go on. That's why I really appreciate it that that Nami is NOT a heroine for capture in this game unlike PS2 release. But I'll get to releases comparison later. 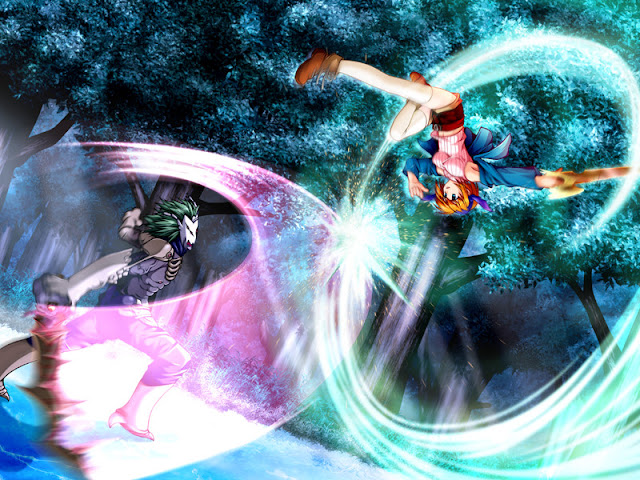 The composition of the game is pretty simple. There are two main parts - prologue till Nami death and the main part where Kasumi has to rely on Touma's help. There are SOL moments in both of the parts. Ai the coffee shop assistant almost entirely governs the SOL scenes and gags. But what surprises me the most is that there is no conflict line in the game. The killer of Nami dies just a few minutes later, so there is no direct antagonist. During the main part we meet a mysterious masked person several times, but short fights never lead to anything serious. We meet shrine maiden sisters who also exterminate lesser demons, but that's it. The greater is the shock of main twist of the game. 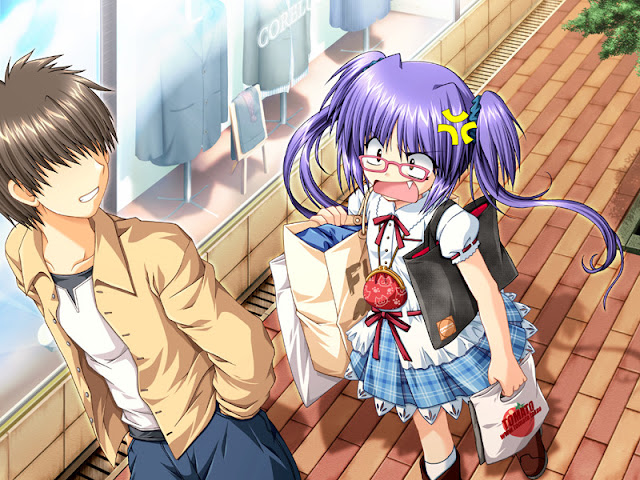 As for heroines routes, Kasumi one is definitely the best. Shrine maiden routes are kind of paired with a lot of scenes being the same. They are fighting heroines, which is a great plus, but these routes aren't as fun as Kasumi. Ai is the only heroine that kind of does not fight. Her route just develops the SOL and gag concepts presented in the common route. 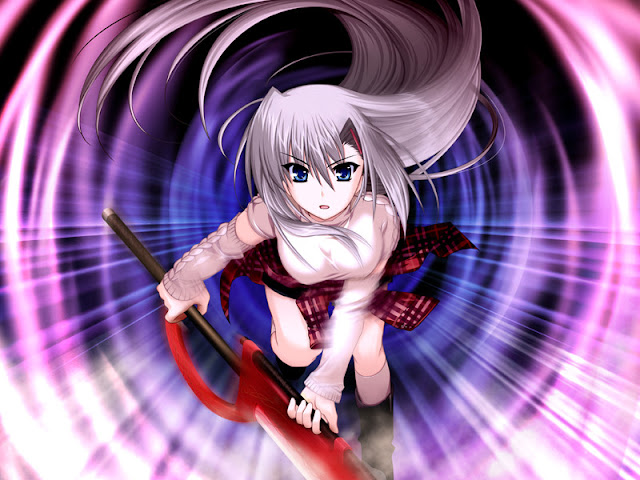 Ok, time to mention the "Enkan no Kizuna" edition. It's so much worse than initial edition. Every change done in it is absolutely horrible:
1) Nami route is introduced. Even if some plot twist allows us to etch a dead heroine, such step is absolutely bad for the structure. From a game with a concept it becomes a cliche game where every heroine must be etched no matter what. It kills the soul of the game.
2) All the extreme or sexual scenes outside the H events are concealed. Well, it's again a horrible step. Those scenes actually contribute a lot to the charm of the game. Sometimes it just becomes stupid. Like when Touma wakes up to see naked Machiru on his bed who urges him not to rise voice or Kasumi might get it all wrong. It makes perfect sense with Machiru naked breast, but it looks and sounds just stupid when Machiru wears a fully closed sleeping gown in Enkan no Kizuna. There are a lot of such scenes. But the most horrible part is that the most emotional core scene of the Nami rape and dissection gets pretty much ruined by the black screen that we see in Enkan no Kizuna.
3) Remake adds a ton of filler choices and stupid meaningless battles with some lower beasts. From a normal story it becomes a tormenting selection of the same 10 choices each game when we need to consequently choose each one and fight 3-4 monsters. I actually remembered that I played remake version like 10 years ago without a walkthrough and those stupid choices and battles absolutely confused me to the point of dropping the game. There are a lot of comments about the game from players who dropped it without seeing the end of any route. It's just so bad.
4) Enkan of Kizuna does not include the Another story extra episode. That episode was voiceless in original version and gave an alternative look at the heroines including Nami. It was done mostly to show an extra H event with each of the heroines, but it's still a little nice thing to have. Those nice things contribute to the individual image of the game. 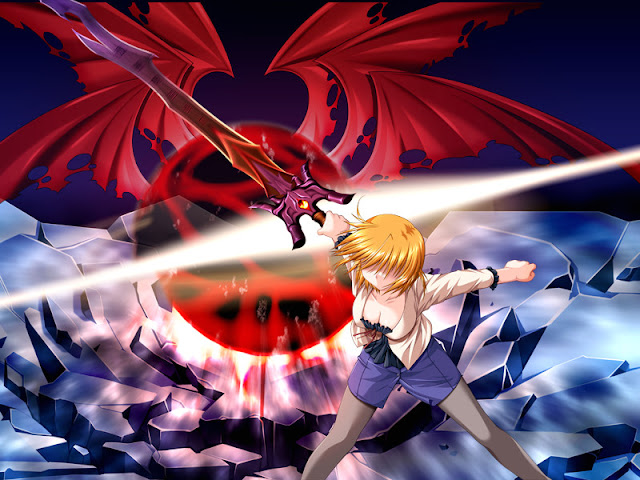 In conclusion, Tamayura is a nice game with a great twist and even midfuck elements. It does not live up to the masterpiece status, but it could easily be one if ending was not failed. But Enkan no Kizuna managed to absolutely devaluate the game to the point that it only brings negative emotions. All the poor votes of the game are probably based on Enkan no Kizuna version. This great action story actually only reestablishes my belief in Akabei Soft brand. I wish I could find the copies of its first doujin plotge - Azazel and Yoru no Kakera. Narumi is not Looseboy, but still a pretty talented scenario writer. 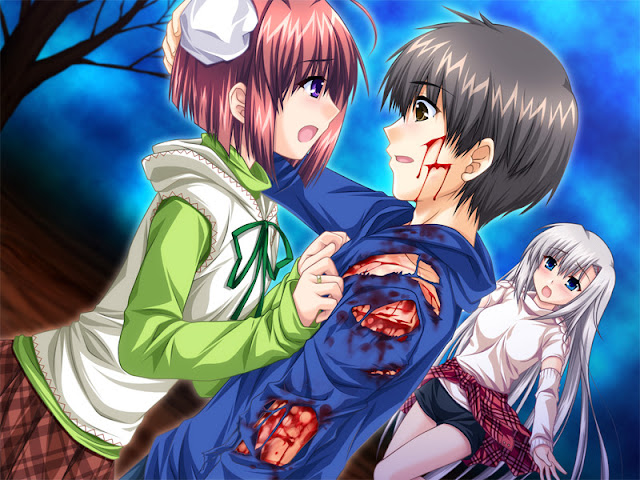 So, you wouldn't recommend this to anyone, then?