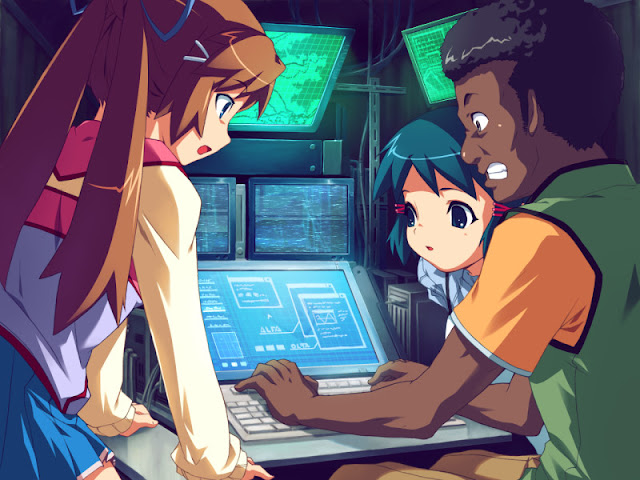 Synopsis: The story takes place in 21st Century Japan (approximately at the end of April 2010). The main character Nasu Souichi is a perfectly ordinary high school student, who tries to do as little as possible everyday, and sleeps though most of his classes, only ever to be woken up by his friend Yuasa Satsuki. They believe they are living in a peaceful time, where no large wars are occurring.
However, these peaceful days are destroyed, when a number of large ships disappear at sea, almost instantly, and with no explanation as to why. A strange woman named Lisa＝Vixen suddenly appears and attacks Souichi... however Souichi also has his share of secrets. 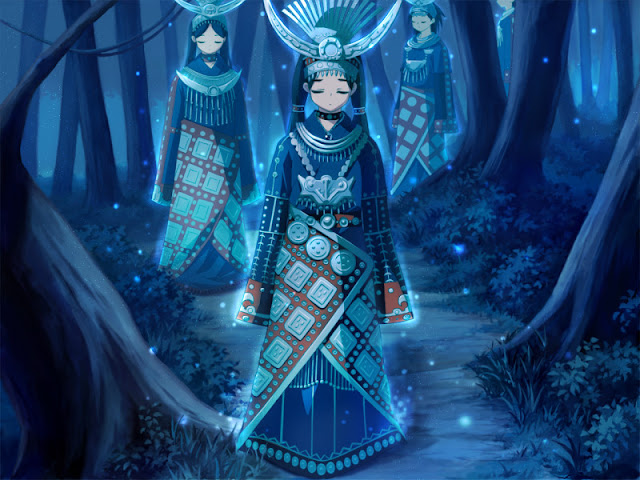 There is already a good review of this game (1), so I'd better present personal impressions acquired during the course of the game. There WILL be spoilers, although I don't consider them to be big enough to really spoil anything - they are needed to present the structure of the game.

Game starts with Lisa Vixen route, and she is the real main heroine of the game. She is both stunning blonde beauty and a great super-agent. There is great teamwork and unexpected resolution there. But unfortunately only this route really resembles spy thriller. Next four routes required to reach true route are less impressive. From second playthrough there is a hint about a strange medieval-looking man as well as two choices - whether to go to school or stay home. Going to school leads us to our osnajimi Yuasa Satsuki route or her best friend Fushi Yukari route. I decided only to play thoroughly through Satsuki route. There is an attempt to fill it with SOL and humor, but it works out so-so. The worst part of it was how it ended up being so much overextended. I was hoping to get a fast H event and move to story already, but this route had as many as three (!) unsuccessful attempts of etching pushing story further and further. In the end, story development stars without getting into intimacy stage, but ends up a degraded version of the same Lisa route, just without the unexpected twist. 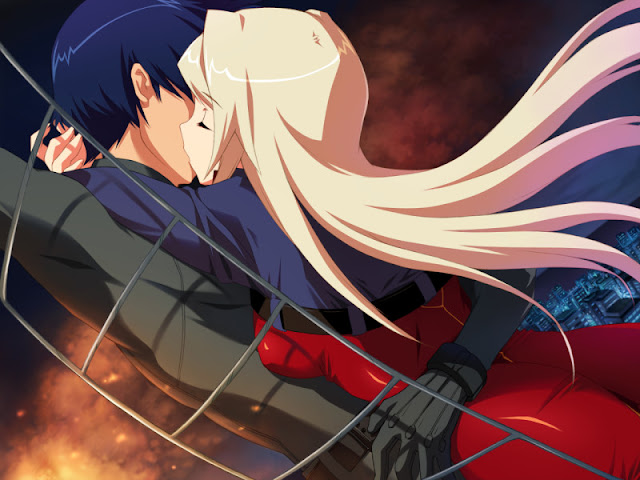 The other three heroines routes are even worse, a total bore-fest. Two of them are just an average town girl and an average town lady with their stories having NOTHING to do with the spy theme. The true route is the shortcut of the same Lisa route AGAIN, just with all three main heroines at support - Satsuki, Lisa and Fushi. There's nothing really special about it, and game just could not be called a masterpiece at this point after all the routes and the True route.

But then right after true route a totally another game kicked in - "Roots". That's a samurai rural story about the powerful sword and fighting the greater evil. This story has a bright cheerful scenery and a cast of funny characters with numerous memorable moments. Then the connection between "Routes" and "Roots" was revealed, and game finally could be seen as an integrative complex story above the giri-giri masterpiece level up to the point of firm masterpiece level, or 8/10. 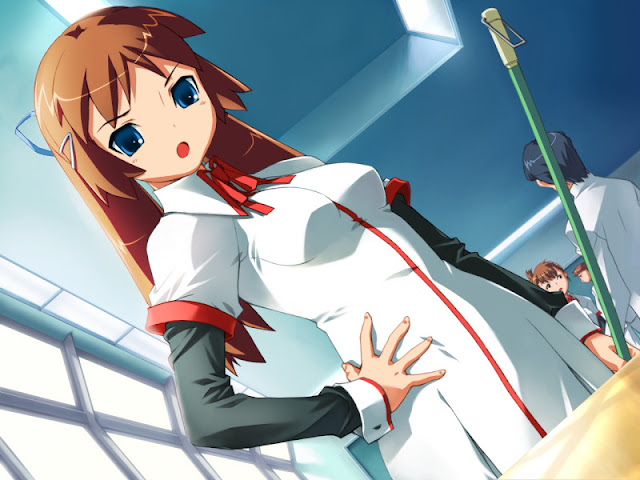 I can't evade discussing technical difficulties here. Only console versions are voiced. But console versions can't be hooked - I tried all the variants possible. Without voicing this game does not really worth the effort. So I ended up running recording high resolution PC version screen and text acquired through hooking, but at the same time running PSP version to get voicing from it. PSP version has auto-reading, but PC version does NOT. So I had to manually click through every phrase following PSP auto-reading tempo. This causes all those un-synchronized lines. As if it's not enough trouble already, PC hooking is same clunky as both Kizuato and Shizuku, which means that lines appear consequently on the screen making hooker tools see it backwards. There was a special hooking script developed for Kizuato and Shizuku making lines be translated in the right order, but not for Routes, alas. That's why translation must be read from the end sentences to the first sentences properly. Leaf games really suck for hooking. Moreover, since I had to manually click through 30 hours of gameplay, I made text appear in full blocks skipping some mid-line animations. Just wanted to noted that, because actual PSP version looks much more alive than what I got as a result.

Routes turned out to be a real challenge for me due to really poor systems of PC version. I spent so much time recording it that it may even affect the pace of my next publications since none are left prepared. Unfortunately, only Lisa route, True route and Roots are really worth playing making the leftover heroines routes feel redundant. Game has a really decent "Roots" story which is difficult to get to due to numerous technical difficulties encountered. I just hope that more people will be able to appreciate the game through my video of it. 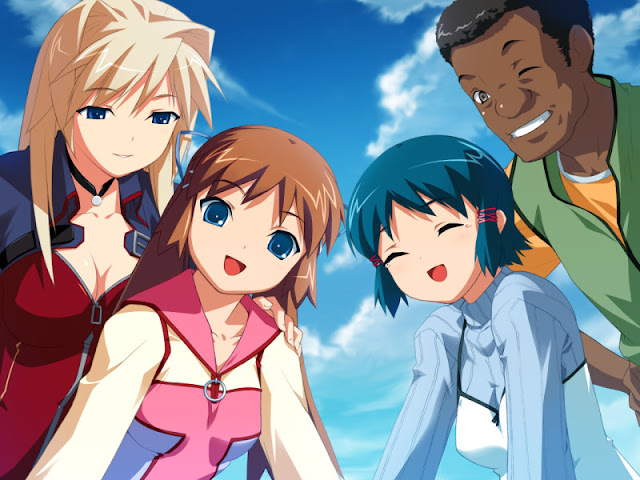 So, Routes is okay in some regards? The only routes worth reading are Lisa's route, the True Route, and the Roots Route? What happens in the True Route? I think you said that it's a shortcut/rehash of Lisa's route, only with the heroines supporting them, including Satsuki?

True route is basically joint infiltration to the same base, just without the drama included in Lisa's route. It's quite short and serves as a bridge to the Roots story.

So, that would mean that the Roots story is the actual True Route then? You said the True Route serves as a bridge to Roots, so the latter is the actual True Route? Also, what is this drama in Lisa's route? No one died there, correct? What happens in the Roots story? Also, Satsuki's route wasn't great at all? What happens in her route? I believe you said the other heroines (not Lisa) are bland and not interesting. Even Satsuki is uninteresting. Anyway, I hope to hear from you soon.

Yes, it's possible to say that Roots is the actual True route of the game. We see Souichi appear in the ancient Japan. He seeks a powerful sword and gets involved into some incident while communicating with totally different heroines. But as he finds the culprit, the antagonist turns out to be connected with the real world, and Souichi also appears to have real world consciousness. They have a very long talk explaining all the history of this conflict. In the aftermath of conflict Souichi returns to the real world.

At the end of the Roots Route, Souichi goes back to the real world, his own time in the present? Is the culprit killed by Souichi? Do any of the heroines question him once he returned from Ancient Japan? I hope to hear from you soon.

We're not explained how Souichi gets to Ancient Japan. Moreover, his consciousness is in total harmony with feudal Japan, so he seems to be another person, maybe descendant. Only much later in the main culprit confrontation we get to understand that it's the same Souichi.

The culprit does not get killed. Moreover, if we choose to fight him with the sword, we get game over. But if we choose to throw the sword away, then the cycle breaks and we are able to recreate the world in a different way without violence. At the end of the Roots route Souichi does not have time to speak to anyone. He just appears in the 21st century town, then says "The magic ends here", "This is our roots. I came to the place where I belong" - and the game ends.

Breaking the cycle and recreating the world without violence in a different way, huh? So, at the end of the Roots route, Souichi just goes back to the 21st century town, his home, then says the quote above, and the game ends? Wow, that's interesting, but it doesn't explain a whole lot, don't you think? Hope to hear from you soon. Also, have you looked at the comments section for "Hello, world"? I left a comment there.

Yes, there is no normal epilogue, so there is little explanation. Still, we get confirmed that Souichi of the past and present are the same person, and it's good enough move to finish the game. The Roots have little to do with girls, so end of the game focuses on finishing the story gracefully rather than focusing on girls.

Hah, that's true. I wonder what the girls in the present were doing while Souichi was in the past? Guess it wasn't explained. The story being that Souichi finding the place he belongs to, his roots being the people he cares about? That sounds nice and fulfilling for Souichi to do. Hope to hear from you soon.