Sayonara o Oshiete has a good number of English reviews (1 2 3), plus reddit comments (4), but what strikes me is that all of them are positive despite some noticed flaws. But as a plotge fetishist and pragmatist to the bones, I demand demolition of fake idols. This bastion shall fall today.
Video playthrough: https://www.youtube.com/watch?v=SvPm3uYd90o 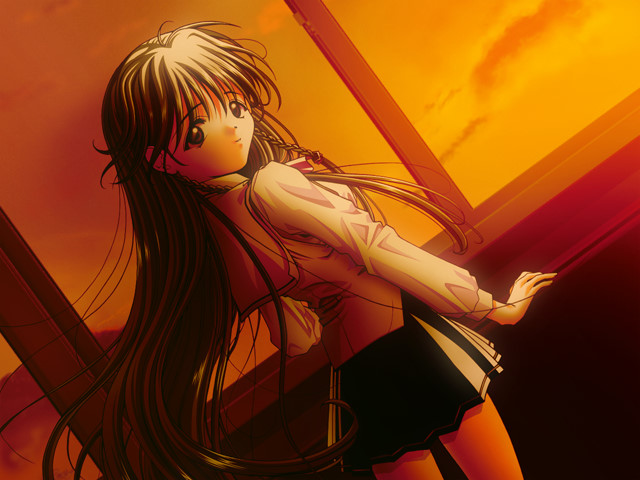 1) Sayonara o Oshiete has a synopsis, but does not have a story. Deal with it. Nothing happens, like absolutely. Protagonist just visits three students out of five after school before going home. He sees some delusions involving the students. Getting into heroine route only tells us about each heroine specific theme. Just as theme starts to uncover there's the same abrupt end for each heroine. Credits.
2) Heroines totally lack charm. Sugamo Mutsuki is presented as a pure angel and supposedly main heroine. But pretty much the first H scene almost made me throw up. There's no realism or depth in the heroines, just specific theme and some cleverly written dialogues paired up with actually eminent voicing.
3) Protagonist is no good. He can be renamed and is an abstract mass of destruction delusions. He's impossible to sympathize with.
4) H scenes. Roughly only half of them are shocking, but the rest are quite conventional. And that's a huge problem for me. It looks like game bears some idea half of the time, but also wants to appeal to as many players as possible and becomes a plain nukige. From idea point of view For Elise ~Elise no Tame ni~ was perfect. H events in delusions were 100% appalling. Sayonara o Oshiete is basically about same horrible delusions, but with very sexy heroines sprites and often appealing H events. There's not enough real trash in H events.
5) Loli abuse. Can't deny - all loli scenes are drawn in a very traumatic way here. But I just detest any loli H events, especially such hardcore ones.

I've seen transformation of nukige genres since the 80s. There has been shift to museum type vns, then to training SIMs, then to devil games, and currently I cautiously try to grasp when the shift to corruption visual novels happened. And Sayonara o Oshiete is the first candidate so far to be grandfather of all corruption games. With the half-measures Craftwork actually managed to depict sexy destruction, and that's no way a compliment considered that I detest corruption games the most.
Horrible as it may sound, I'm relieved to see game translation project stalled, because completion  would cause an outrageous reaction and backlash at Japanese developers due to very troubling content involving loli characters.

The only definite strong sides of Sayonara o Oshiete are first-class voicing and great song theme. Visual and textual decisions are questionable. But for me the number of negative elements outweighs it all. The only lingering taste after the game is nausea, and I hope to forget it as a nightmare asap.

So, the VN has very noticable flaws to it that weren't addressed in those English reviews?

I absolutely love atmosphere and first two hours of prologue in this game. But then very disgusting loli/tentacle scenes begin, and I really feel offended by these scenes. All those distorted faces and appalling perversity makes me want to throw up. Initially likeable girls become corrupted in no time. Other people probably had better stomach and could handle those events in a less traumatic way. I also can't stand Black Cyc games for the same reason. Maybe it's just my problem.