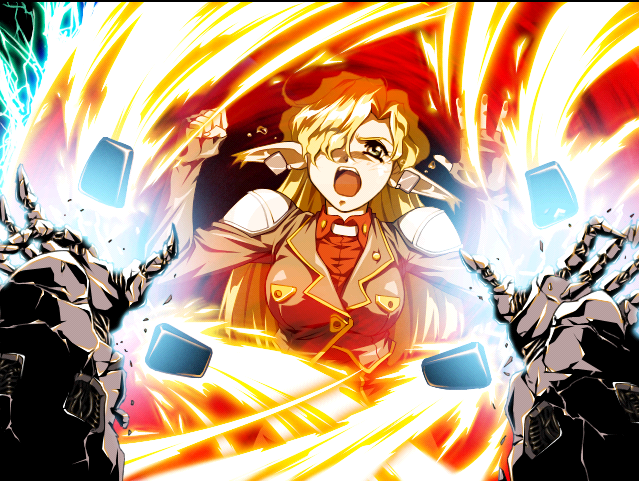 Synopsis: When I woke up from the darkness, I learned that I was the legendary Devil of Darkness, that was said to have the power to destroy the universe.
The beautiful girls approach me one after another. My shout roars in space. When I pat a villain gently, he is discomposed into molecules... It seems that I have the power... But... am I really the Devil?

Structure: There are 10 chapters and the branching at 5 good and two bad endings happens only in the last chapter.

Difficulty: Moderate, actually. Without the guide I had no idea where the branching really happened and only achieved a bad end.

Rating comments: It's my firm belief that I can only overall 8+ if I can recommend the game to anyone. The point is that I can't. This is one of the best bakage ever with a good story, great protagonist and memorable characters. It's just that I can't get satisfaction from bakage, even if it's the best bakage ever produced. And this game can easily rival this status. 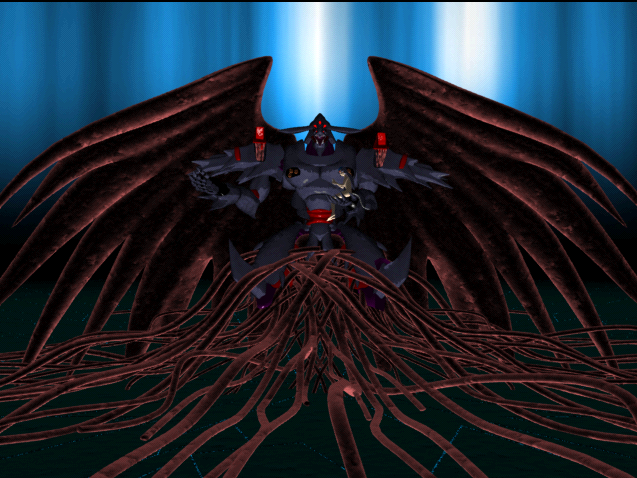 Protagonist: We don't get to know much of his past. He just woke up in the black demon form already. He remembers his name as Miyamouto Koujiro and he's definitely not a student. His actions are well-weighted. He's not aggressive since no weapon can pierce the armor of his body and most of aggressive actions he does unwillingly, just because someone else presses the joystick button - the joystick that manages his actions, even walking... 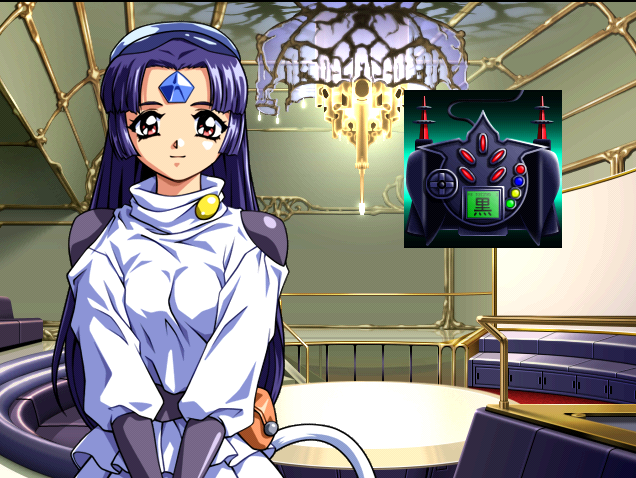 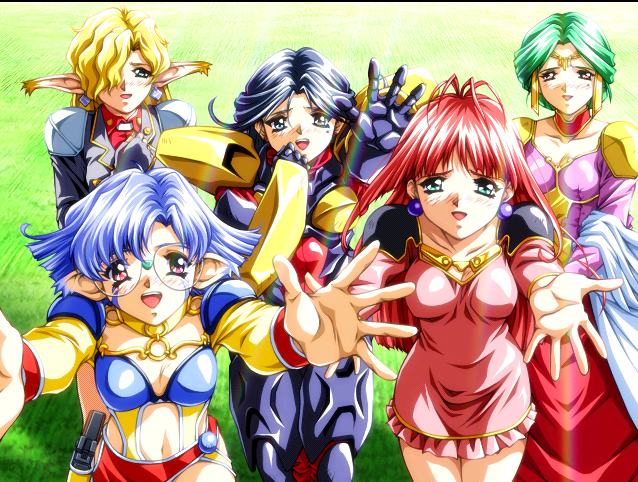 Characters: All the characters share the same route with the only branching in last 10th chapter, so there is little emphasis on individual relations. But each of those characters are your adventure buddies and they are quite memorable so are worth taking a glance on. 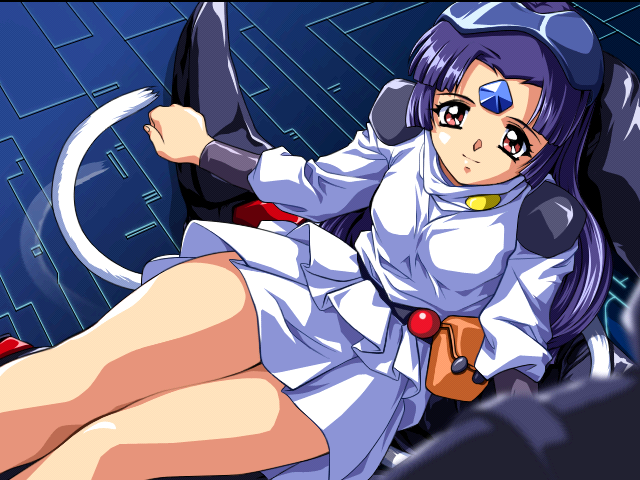 Ren holds a special place in the story. She's some kind of guardian and servant of the dark lord. She's the only female character that is not human. Her ending can be considered the true one since the dark lord keeps on going the old way, with only his servant on his side. She values the safety of her master the most and she lacks human traits for the most part. 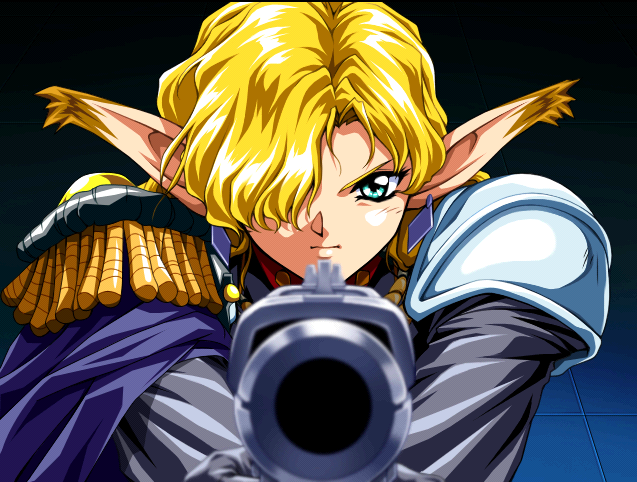 Eva probably has the leading female role. From the start she gives a "battle" to the black demon ship and looses not only 90% of her fleet, but also demon's missile hits the planet and then another planet damaging the other 5 planets of the seven start solar system which whithin a month also explode... triggering the solar system to explode... damaging the nearby systems... and Eva has to pay for the caused damage for the number of years close to eternity. Within her little powers she does her best to pursue the dark lord and actually manages to catch up to him three times! First time she's getting close with him due to overdose of a medicament, but gradually starts dreaming of him. What makes her special is the amount of hardships she suffers in her quest, majority of baka events happen to her. 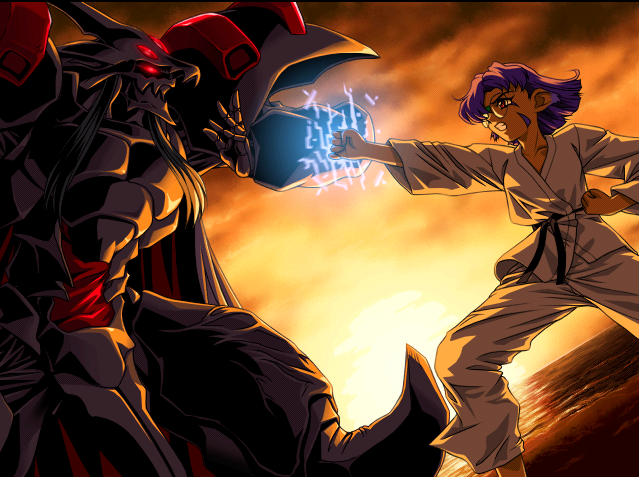 Fey is the third heroine we meet. She's a very poor bounty hunter without knowledge that the gun needs bullets or that there is a safety check. The crew saves her from one of the wild west style bounty hunter duels and she begs the dark lord to accept her as apprentice. She's a pilot of a huge mecha built by her uncle and sometimes is of use as such. Fey provides all the leftover baka events for the game. 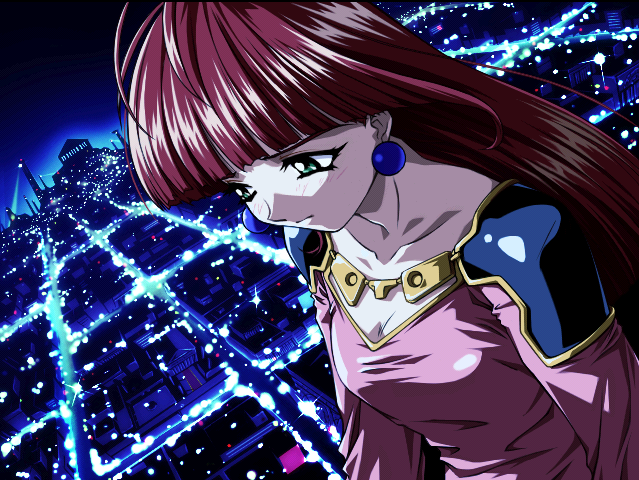 Amelia is the princess of one planet, but she runs away from the wedding with unloved groom and seeks refuge at our ship. She's the boldest one and has the biggest number of H-events. 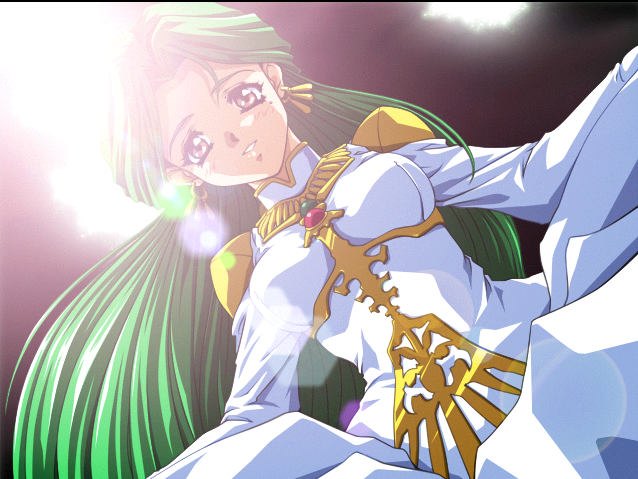 Chime is actually Amelia's mother (might be wrong on that) and the queen of some planet. She only has two plot H-events and not of much significance besides that. Kind and experienced. 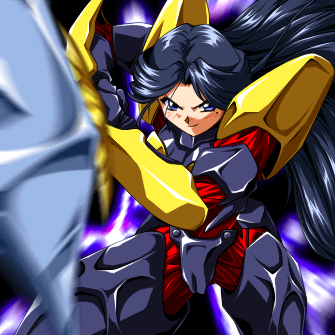 Vermouth is the captain of the fleet belonging to Chime. She only has one H-scene and some miscellaneous use for the story. Hard-boiled knight.

Story: As in every bakage, story is not of much coherence. So we wake up from the noise that the surrounding fleet makes firing at us. Rei worries that it can bother our sleep and from the controlling gamepad launches a missile that destroys half of the universe. On the nearby planet we meet Eve who gets to know of dark lord's identity, picks up the gamepad and presses a button... which launches a missile that makes a huge hole sends her in the open space. Out of pity we teleport her back to the planet (without her clothes - it's a safety measure while teleportation as Ren says). Eve manages to find us two more times - not without the help of her super space police bycicle! 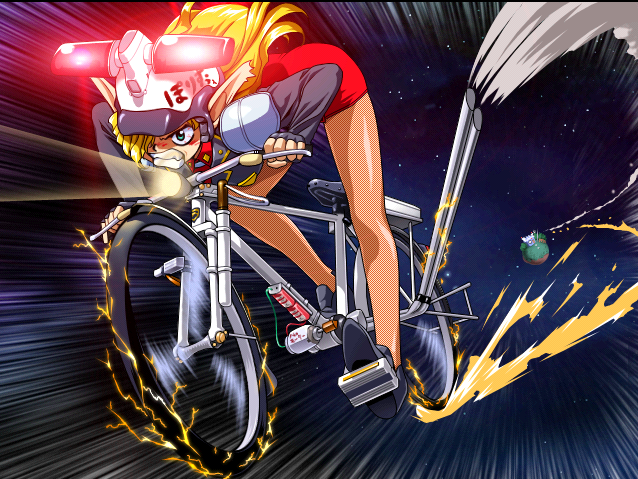 Afterwards we visit several more planets without any real purpose and help other girls on those planets. Nine and a half chapters of pure bakage and grew quite tired of it by the fifth chapter. Tenth chapter suddenly presents an enemy rivaling our powers and some serious development with deaths, blood, branching and bad endings. 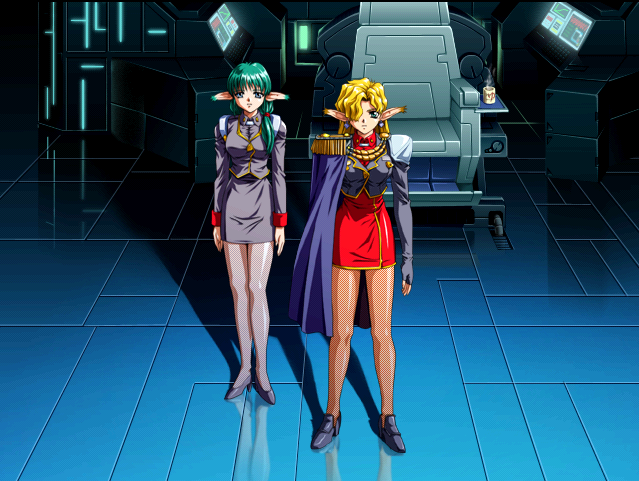 CG: I've zero complaints about CG. They are numerous, beautiful and fun. What I especially would like to notice is that there are lots of full height models on CG which is so rare in today's VNs. Another flavor is the backgrounds. They are excellent with the most notorious are different planets backgrounds with lots of characters on them. They are drawn with love like on this screen. 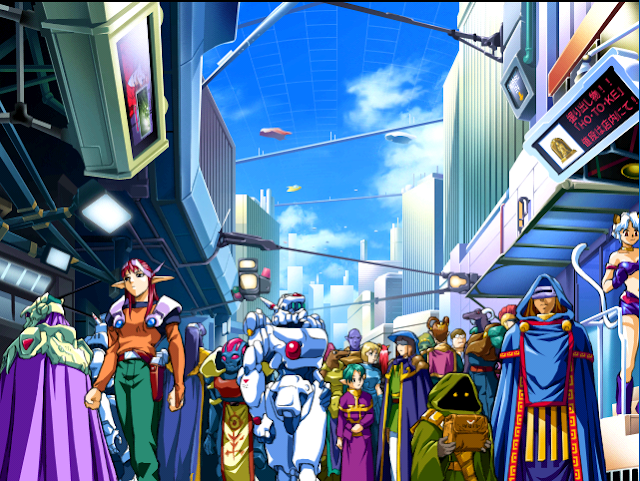 OVA comparison: OVA ep.1 loosely retells chapter 1 plot - loosely because it misses on several smaller events. The major differences that in game there is one more Eve ship penetration on behalf of the dark lord, but the most significant difference is that in OVA Eve does not recognize the dark lord identity and spend the night with him, but in the game she does regognize that in the end and sets into pursue. OVA ep.2 starts with chapter 2 and mixes some 5 more chapters together inserting its own plot line. Those events actually take place on three different planets and it just tosses them together, hurriedly adds Chime H-scene and ends without any reasonable conclusion. The game's much more satisfying on both the adventure and the endings.

Sound: No complaints either. Lots of compositions of great style.

Minigames: There are actually two minigames in 10th chapter. One is faking an rpg with an ability to attack and defend and the other one is shoot 30 appearing targets in 40 seconds. I barely passed both of those mingames from the third try.

Overall comments: I can't remember a better bakage even from contemporary visual novels. It's possible to rant on characters and story, but it's essence is in baka events so I'm presenting CGs of some of them. 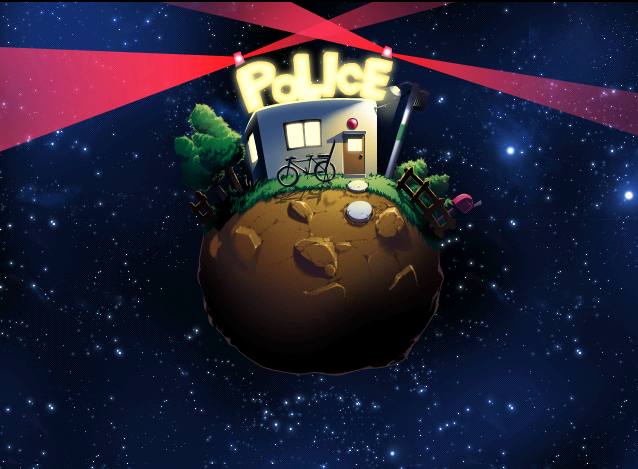 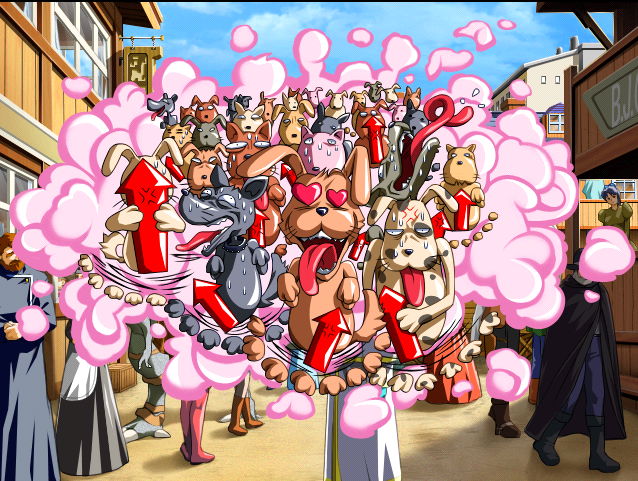 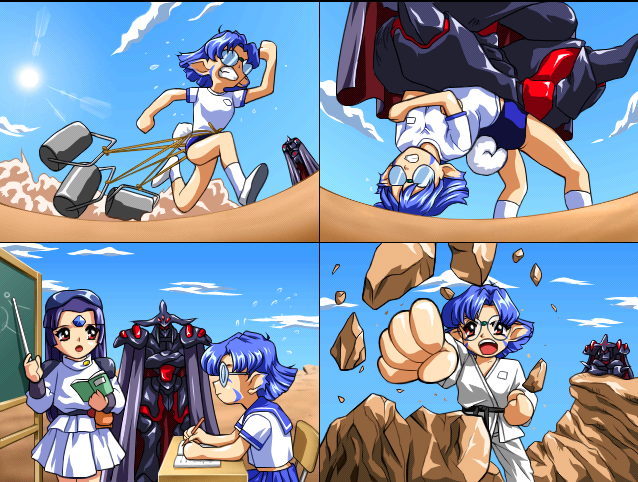 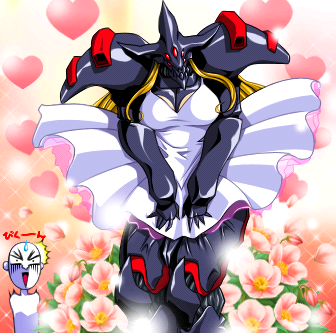 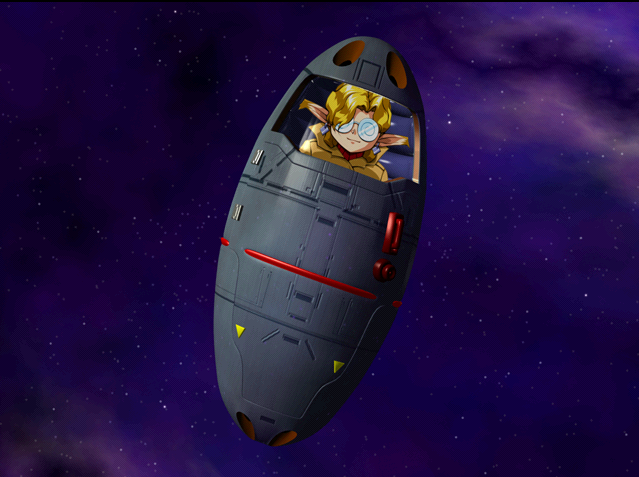 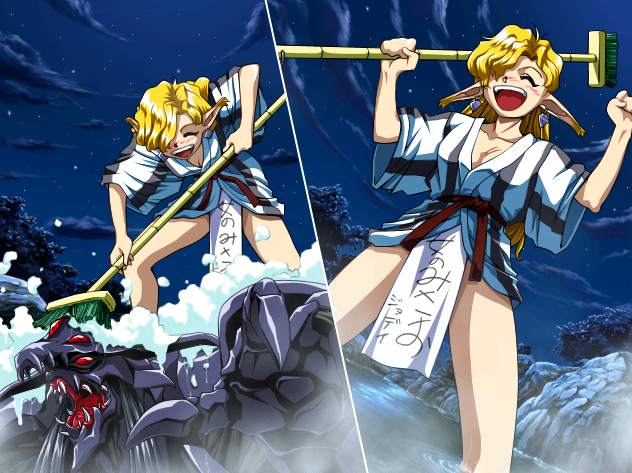 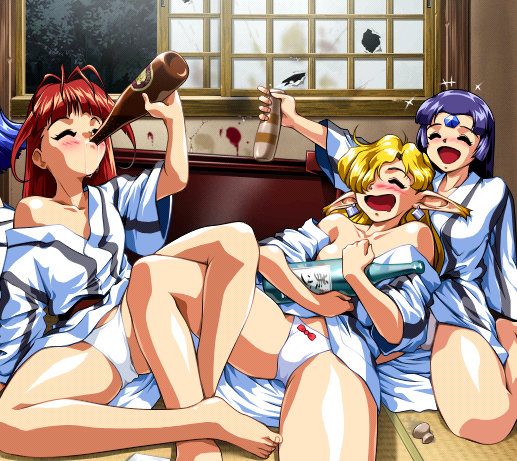