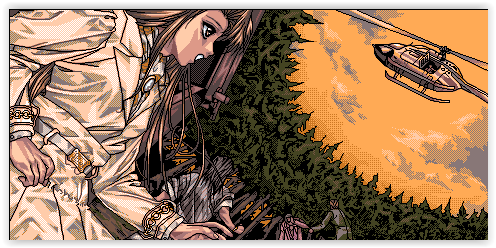 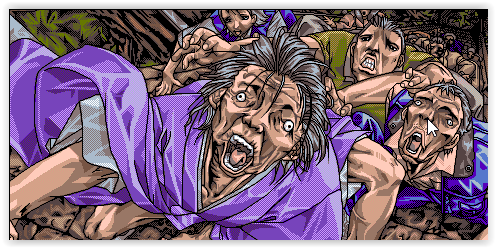 Synopsis: "Es no Houteishiki" is the second game in the Detective Suzusaki series. The events described in the previous game, "Kuro no Danshou ~The Literary Fragment~", led to a series of suicides, but the case was believed to be closed. But Kusanagi, the young brilliant psychologist and assistant of the famous detective Suzusaki, has now to face his own past. The traces lead to a remote village, which has seen nine mysterious, unsolved murders in eleven years. Soon, Kusanagi discovers a strange religious cult, that might shed some light on his past...

Structure: One route without branching or dead ends.

Difficulty: Easy. Just need to aim at the mouth of the needed character all the time. There were like only 10 times when needed to click something else. And one screen that took me the longest is where I had to click at tiny triangle of pantsu to advance the story...

Rating comments: Story is not bad at all. The problem lies with the clustered systems, lots of unnecessary female characters and H-scenes and shallow characters.

Protagonist: Young psychiatrist Kusanagi. Nothing extraordinary besides that. We never see his face as if he's telling the story of Suzusaki detective from afar. At least he's of some use in this game - he witnessed some disturbing events in psychological facility eight years ago and those events now backfire. 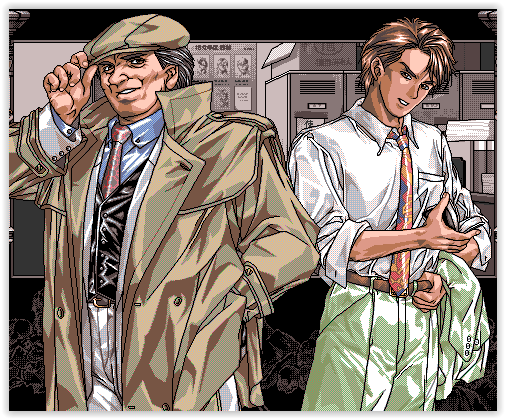 Characters: There are too many useless female characters introduced for the main purpose of H-scene, I bet. Apart of that, it's the same cast, evercool Suzusaki, same two police detectives and cute secretary Asuka. Well... she's actually cute only the first time we see her as her sprite is more or less transferred from the first game. As for me, all the character designs and CG in this game are ugly, yet the drawing is very fresh. Maybe it suits the atmosphere of the game, but I can't sympathize with those weirdos. At least let me show you the cute Asuka the first time we meet her in this game. 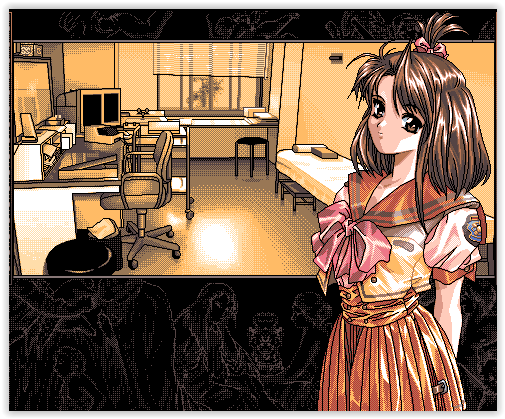 Story: That's the most difficult part! Story is much more shallow that that of the prequel. And to cover that shallowness we constantly have to be distracted by slice-of-life fragments with some girls or H-events with them and when that's not enough we get to see the flashbacks from the past, mostly from that psychological facility 8 years ago. So the story starts as Kusanagi with his girlfriend come to a quiet ordinary town... that in the night becomes prostitutes town. Why oh why was such stupid move about prostitutes needed? Suzusaki bought a full building to establish detective agency here and we deal with a strange series of suicides. The victims usually open up their abdomen with a knife. Here's where Kusanagi memories show up ... first depiction of his activities in psychological facility and its patients and then strange behavior of some staff members followed by same suicides. The new present time suicides are especially strange because they happened at the very same time with different persons who never knew about each other's existence. Suzusaki is already a well-known occult researcher so he digs some disturbing stuff about one of the three legendary items from Amaterasu god that is rumored to be in this town. And I don't think I'll spoil much if I say that one of the psychological facility members is involved (since there are a big number of both doctors and patients there). So it really felt like Silence of the lambs when he seriously appeals to the fault of the government, accumulated DNA diseases and overpopulation to justify provoking suicides. And Kusanagi gets to remember previous talks to him - lots of disturbingly serious stuff to chew. 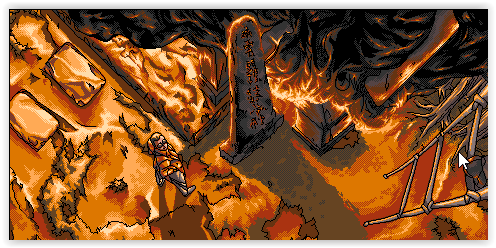 CG: The only full-screen CG are actually HCG with just maybe 2 ordinary CG for couple girls. The most important events are depicted on some 1/3rd of the screen just as usual backgrounds (character sprites go beyond the background so they are full-height) so resolution is poor and lacks immersion.


Sound: I really prefer midi sound. But here we get the usual .ogg or something. So music often starts at the beginning of the sequence, plays for some 2 minutes and goes down. For the rest of the sequence we get to play in total silence. That's not good. The game is not voiced... oh wait, there is exactly one phrase voiced - it's in one of the later scenes when there is imminent danger rises, Asuka cries "Oniii-chan!" and that's all.

Systems: I usually hate to speak about systems, but in this game it just has to be done. First of all, the game won't load correctly in win10. But we've got dxwnd to cover that, no biggie.
Second issue is that at least in win10 font is so bad that every character is only some 30% filled - we see different dots of it and usually can guess its form, but it may be just win10 issue, no biggie. We still hook the text and it's drawn as usual this way.
Game is point and click, but it narrows down to mouths hunting as characters sprite move. There were like only 10 occasions when I had to click on anything else rather than mouth.
The cursor does not change shape while moving on different objects... in fact it does not change shape ever and you have to point the ugly white small cursor everywhere!
For the first half of the game there are no interactive commands, but then Suzusaki tells us to move and explains us how to push at the border of the screen to invoke the menu for moving! Great - I thought - since I totally overlooked that mechanics! So in the second part of the game we can invoke that menu and push move... and guess what... we don't get to use it even once... and when I attempted to there was a usual commentary than I need to do something else rather than go away.
And the last - but not the least - there is a map of psychiatric facility in the game with a lot of rooms and initially we get a chance to come to every of those room and talk to its inhabitants. But this map is later used just once when we hear a woman's scream and need to find the source among those rooms! And when we found the source, we never ever get back to that map...
So there are lots of systems piled together and each of those system is crumbling and poorly designed.

Overall comments: As I already told, story is good. But Japanese reviewers promised falling back from occult matters in the realm of psychoanalysis and physics and that's barely true. What I see is the same occult stuff, just spiced with mental illnesses. ES should have only ment that inner chaos that is protected by the wall of consciousness. But in reality ES kind of also started to mean ESpers at some point. It should have been a story from the reality and in fact it involves too many surreal stuff. I can't blame the game or Japanese reviewers for that game was not fulfilling my expectations. If we look at it just as a sequel of Mystery of Necromonicon, it's a sequel worthy of its prequel and it should only be examined as direct continuation of prequel, not some original story with original themes. I rated this game quite poorly because of unnecessary slice-of-life episodes, useless spontaneous H-scenes, crumbling systems and poor character design and CG. But if those factors are overlooked we get a good story and I like good stories. 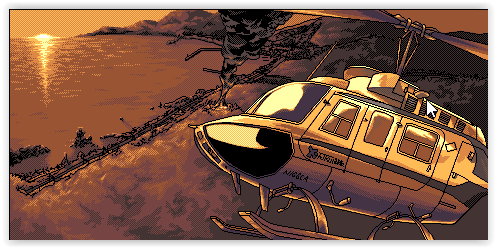