Foreword: I've noted the series quite long ago, but only when approached 4th final work decided to play the prequel that's directly connected with 4th part. 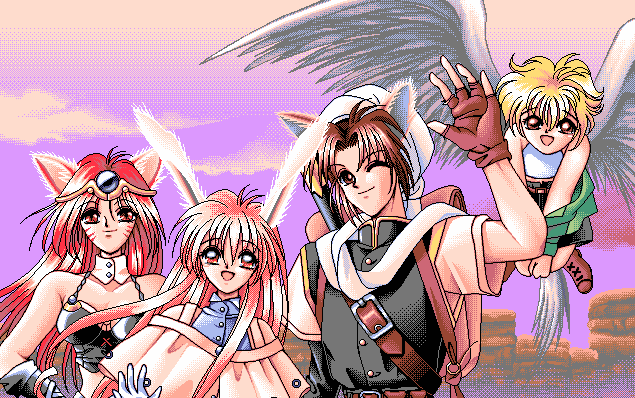 Synopsis: Wild Force is set in the same post-apocalyptic world as the previous entry in the GaoGao series. A virus turned most of the Earth's population into mutants, and human beings continued living in artificial cities, separated from the rest of the world. This time, the story is seen from the point of view of the mutants themselves (the previous GaoGao games had human protagonists). These look more like fairy tale creatures (half-cats, winged people, etc.), and continue living on the wild, dangerous Earth, keeping close to their respective animal tribes. The protagonist of the game is a young boy named Wolf, who belongs - you've guessed it - to the wolf tribe. One day, exploring the wilderness, he stumbles upon a strange cave with lurking monsters. Together with a girl from the rabbit tribe and other fantasy creatures, Wolf discovers an advanced civilization, learn of the existence of human beings, and eventually becomes a hero who saves the new world from a grave danger.

Structure: One route with 8 chapters.

Difficulty: Easy. Scene advances after brute-forcing all the commands in all available locations.

Rating comments: I'd give it a perfect score, personally. But what keeps me from it is painful command selection brute forcing. Game is really long itself and did not need such extra longevity layer. Another minus is interactive H-scenes that can't be skipped and that take really much time with that painful scrolling up and down. Characters are cute and memorable, but in H-events they often have distorted faces, that's a bit unpleasant. Oh well, and since the game is for pc-98 only, it has only midi for sound. Otherwise, a perfect game with a perfect story.

Protagonist: Wolf boy Urfy. He admits that he's given the name just after his tribe name, so if English version existed, he'd probably be called Wolfy instead. He has face. He is rational, skillful in sword art, supportive, tries to cheer up companions even in difficult situations. And he tolerated that Rabby tsundere bunny girl (she's named Rabby after the rabbit tribe...) the whole game absorbing all her hysteria. He never imposed himself with women (with one small exception during interrogation). He's the perfect guy. He is really unusual and he leads the story without being pushed by circumstances.

Characters: There are really many characters in this game, so let's just present our most frequently met party members and enemies. First enemies. 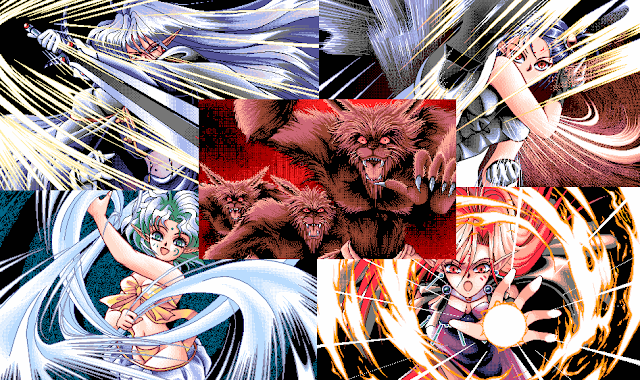 Enemies are rather cool. You would not believe it, but there was just one enemy that was bitter alienated and the others had their own reasons and could be debated with words, not swords. 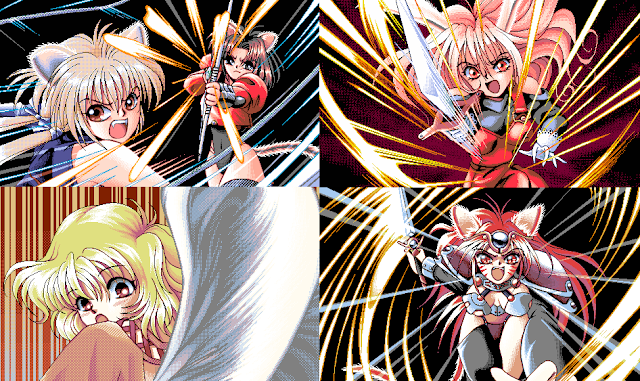 Allies are even more developed, of course. First we have baka twins Leona and Dora. They move usually as a separate unit and we constantly stumble upon them wherever we go.
In the right upper corner is our acquaintance throughout the whole game - Rabby. She is total tsundere, blushing and shouting all the time. She is also a spiritual medium and she's the first to hear sounds or perceive traps. She's not of battle sort and on this CG she only fights because she has spirit of Ilia controlling her.
Ilia is the warrior in the right lower corner. We first find her spirit that occupies Rabby body, but then occasionally get her old body. She's strong-willed, but reasonable. She's also breaking everything she touches.
In the left lower corner is Nise. She's a gluttony-obsessed coward who can not even fly. We find her in the second chapter and she has little utility serving as a cute girls who's often crying and is afraid of everything. But she finds her use in one of the last chapters.

Story: I'll give chapter titles with brief description of contents:
1) - Underground - Urfi stumbles upon Raby in a dangerous forest where people disappear and together they fall through the ground.
2) - Legend - The chapter takes takes place outside on the way to the capital city. In this chapter we save Nise as the only survivor of beast assault on the road. Then beasts attack and we fall underground and occasionally find Ilia spirit that embodies Raby.
3) - Resurrection - Capital city inhabitants takes us for saviors from legend and send us on a mission to recover the body of Ilia. After some adventures we succeed in that.
4) - Trap - Ilia is resurrected and we go to the village that was assaulted by the beasts. On the way back from it we get to the trap of one of the enemies. Next Ilia gets deadly wound by mysterious enemy.
5) - Ephemora - In order to save Ilia, Urfi with baka twins go to the witch Ephemora for ambrosia and after some adventures get it.
6) - Key - Time to get on a mission to save the world. The key to all mysteries lies under the temple where Ilia body was found. And underneath it is a high technology human ghost city where the answers to all the questions are found during next two chapters.
7) - Dark eater - no spoilers
8) - Blue - no spoilers

CG: Game was quite greedy for non-HCG throughout the game but under the credits roll it presented so many cool new CG that I'm ready to forget about that. I found great pleasure in graphics and non-HCG in this game. The game has its cruel and even guro parts with the whole villages massacred, heads thrown away from the bodies etc and I liked those a lot. 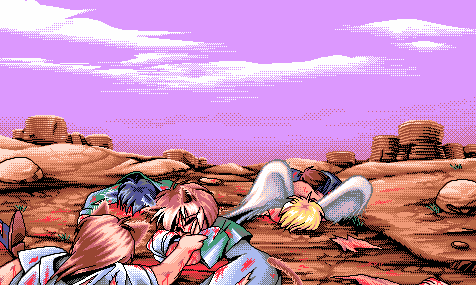 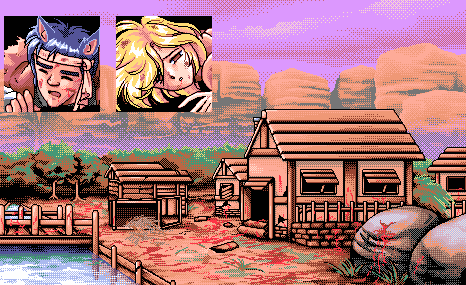 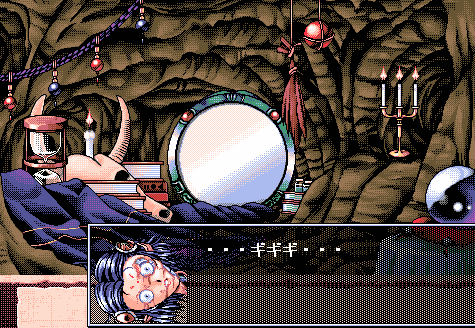 HCG: I've counted it and there are 19 H-events in the game. That's it! 19! And all of them are interactive that you need to constantly choose different commands. So each such event usually takes several minutes of your time. And I'd say that 60% of HCG weren't pleasant due to distorted face features. Girls in this game are very proactive. They sneak into Urfi's room the same day they get acquainted. I was so happy to note that there were as many as three girl characters who never took interest in Urfi... but by the last chapter there was only one minor girl character left without H-event and that was a boarding house host girl without a sprite who had a husband she run business together. All the other female characters sooner or later had H-event. There were two more girls free from his charms, but one was a zombie-android creature and another one was heavily wounded on meeting her and died withing two minutes. So I wish there were much fewer H-events.

Sound: There was only midi bgm. Quite nice bgm to not annoy during 15 hours.

Themes: This work is a concluding one for all the series (since there was no 4th part in plans in 1994). It has big involving story and gives all the answers to all the questions of this part and previous ones. What happened to the humanity? Who are mutants? Who are demon children? Who are Dark eaters? Who are Light Eaters? Everything is explained in last two chapters, so it's a very satisfying work designed to be a grand finale 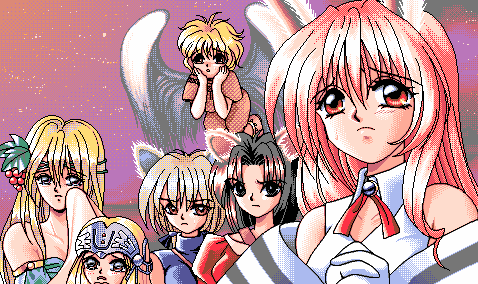 Originality: This work is the origin of a new game genre - heartwarming party adventure. It is basically an epic party RPG that was stripped of absolutely all RPG elements and given command selection instead. There are a lot of battles in the game, definitely more than H-events, so over 20. And each battle is played individually, not through fixed commands. Commands vary for each battle and you can't move on till you brute-forced the needed commands. That makes realistic involving battles where most of the time you talk with your party members and the enemy and read in text as you advance or try to defend or invent some cunning strategy or even flee from battle. And this adventure is heartwarming because a lot of time is spend walking or attending city buildings where you mostly chat with your party members. That allows to develop really deep personalities and get to know everything of each other. Add here a very good text - it's very easy to read, it's involving and it has a lot of funny face animations and emotions.

Humor: Apart of jokingly inter-character interactions there are actually a lot of very funny humor moments that are events-based or repeats-based. Here's an example of an event joke: the party flees from an overpowered opponent and uses consequently all the secret items acquited from the city - first makibishi spikes but enemy only jumps over them (one of party members actually gets into them which adds the fun), then a smoke bomb, but it does not help much. Then we search the bags and throw a pie into an enemy and enemy leaves us alone for the rest of the day! 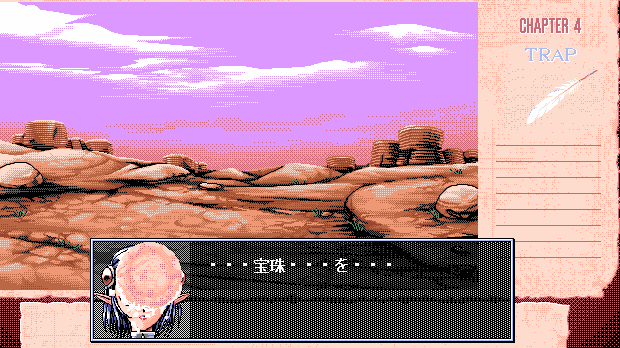 I adored the repeats-based humor moments as well. It's mutants world and when we first here word "ningen" (humans) party members give their variants. The coolest one was from Ilia that she ate it in salad - it's the red vegetable from the garden, a carrot (ninjin)! Then at the human secret facility we find a pc with an interactive chat program. The girl there calls herself Crazy-chan and to most questions answers "Don't know". To the question what is "ningen" she answers... a red vegetable from the garden! Ilia joyfully jumps up shouting I told you, I told you! Then Crazy-chan adds "That's a lie, actually" -Arr you little!!! 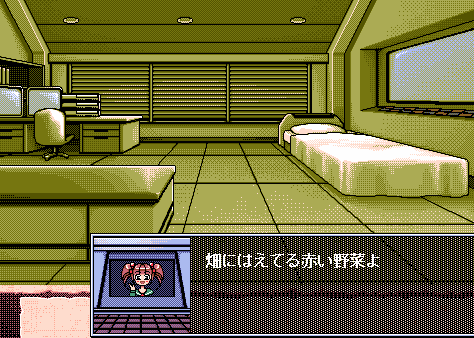 The story with repeats goes long much further. At one moment the party starts to guess meanings even of known words they stumbled upon in secret human facility. Security door asked a number and the party is already discussing. It said Nampa! How shall we get it with the door?! No, it said Member!
At one of the rooms we find the box of this developer's another game - Waku Waku Mahjong Panic! - we read the whole advertisement on the back of the box and get to discuss what Mahjong is. One of the variants is that it's the benefit that you gain after load is returned to you (margin). There are also cereals called Gao-Gao with a girl on it. I really liked these real world references without breaking the 4th wall completely. 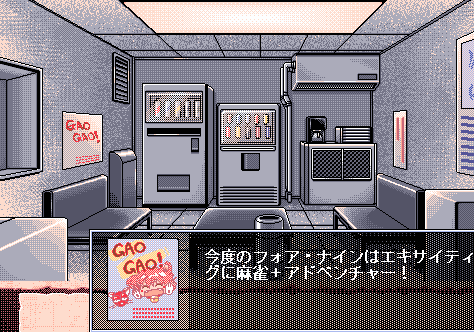 Overall comments: I liked this game a lot. It has everything a masterpiece game should have - thrilling big volume story, great cute characters including enemies, absolutely fabulous text, humor just to my taste and the unexpected and most welcome shift from fantasy to post-apocalyptic sci-fi like early Might and Magic and Wizardry series. The important note about this game that its pc-98 rom is very easy to find and it runs with any anex86 emulator version. This emulator does not require to tune it in any way and game text is easily acquired by default ITH hook. Google translate with Translation Aggregator gives a very good translation after its upgrade in the end of 2016. So no need to be afraid of scary PC-98 emulation. Good stories know no aging and should not be forgotten. 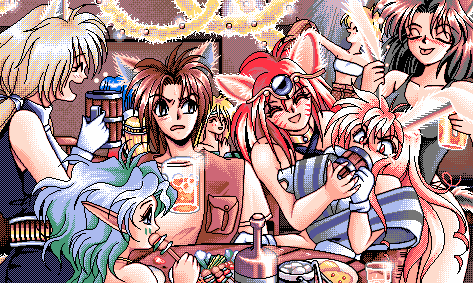