Foreword: May had zero interesting releases without review for me, so I chose one with the English review already (1). My hope in nakige is crippled, so I wonder if it can be restored with this game, just as it affected this review's author.
Title: Ashita Deatta Shoujo
Developer: Moonstone
Date: 2003-05-30
VNDB link: https://vndb.org/v464
Youtube walkthrough: https://www.youtube.com/watch?v=JSo0XrcBv54&list=PLs4Gp5VU4Fv_DLXni9hleM4mOM7gpQmjf 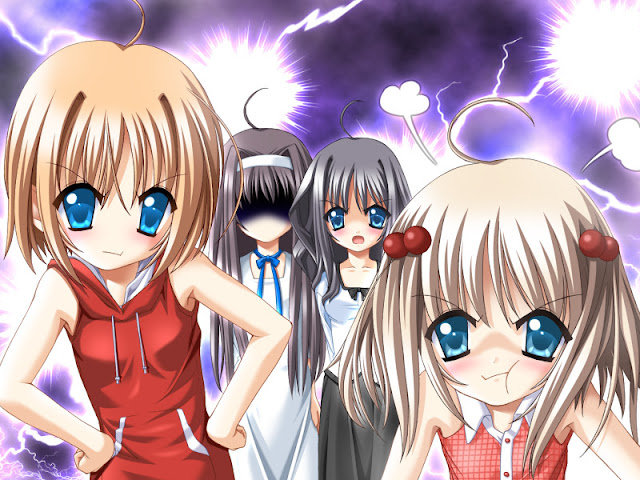 Synopsis: "It's summer. The place is a crater lake near the naturally ambient, rural village "Takachiho". The protagonist is standing still, blankly looking at the far-away sky.
Amnesia...
His memories of the past have been lost.
It's a strange thought, but to him on that day, the sky seems tailored to both dusk and sunrise, a mysterious color..."
The protagonist, Tachibana Takashi was a freeloader in a house, living there with four beautiful sisters. Until suddenly, one day, a sad incident occurred... 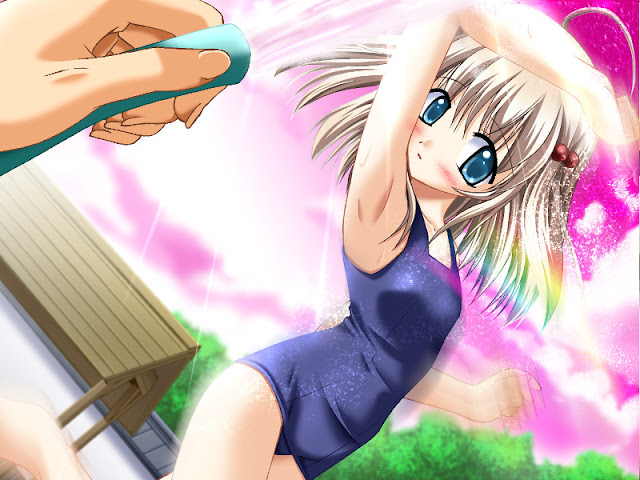 Rating comments: Wow, it's a very good score from me to a nakige/utsuge. Basically only relatively weak characters and two lolis downgraded the overall impression. There is also lack of CG, and many important scenes conveyed by text alone.

Protagonist: Ryuu is our typical guy, representation of reader. Game shifts from present to past very frequently, but protagonist does not have memory in any of periods. Typical good-for-nothing lad. 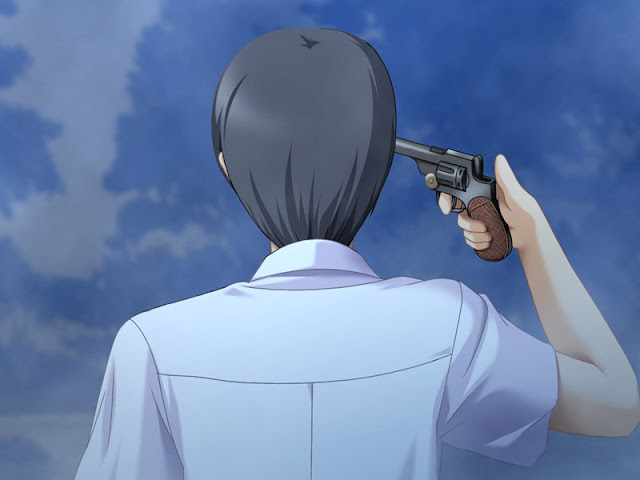 Characters: I played just two routes, as usual. Both Sanae and Fuyuka are our older sisters. But if they wore the same clothes it would be impossible to distinguish between them - the only difference is that one has straight hair and the other one wavy one. The same, actually, may be told for younger sisters Rin and Misato - only hair and clothes makes them look different. The biggest flaw with the heroines is that they hardly really communicate with each other, it's just so wrong for blood-related sisters living together for all their lives. And it's pretty weird how side-character girls are better fleshed out. 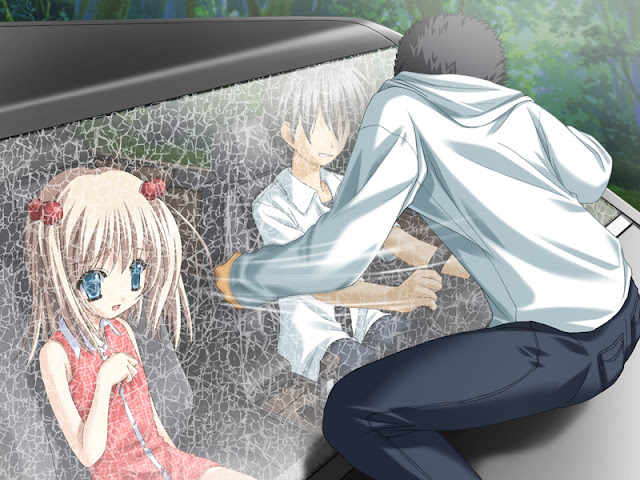 Story: Reader is hooked right from the start with time shifts and mysterious diary reading. Whenever I thought that game finally entered SOL state with eating tarts and such, I was corrected over and over as there were always dialogue lines with ambiguous context or sudden change of atmosphere and music. I don't think this game has filler scenes, it really punishes for the lack of attention. There are different mysteries hinted all the time.
The directorship is really cool as time shifts are presented in really confusing manner, like in present they go home, then time shifts to past and they also just arrive home.
The biggest problem is the ending. There is that a-ha moment when suspense cover yields, but the shift between the main game flow and the revelation is huge which can easily alienate some readers. 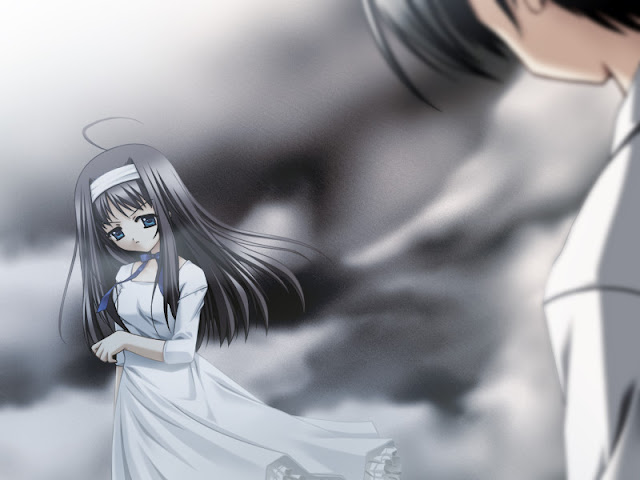 Overall comments: Game resembles Kizuato from Leaf in many ways, but deliberately takes a turn towards ambiguity and suspense over action. I liked both approaches. Ashita Deatta Shoujo demands more attention and imagination from the reader and gives less in the field of visuals and characters. But curious mind will find a lot to like in this metaphysical approach to the mystery.
Oh, come on, just go read this other review (1), it's so much better. 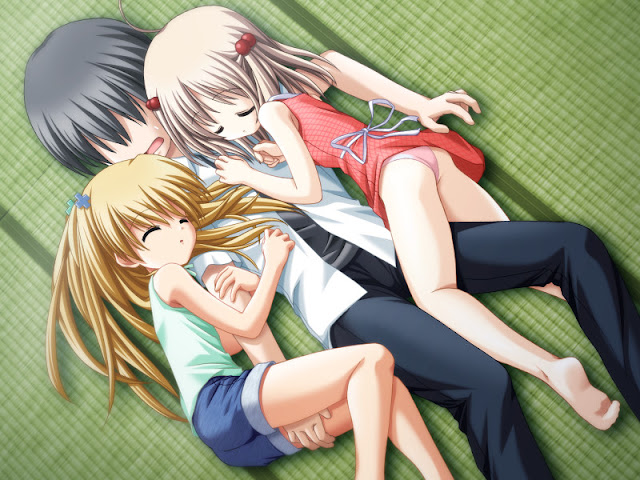 Hello, how many routes has this VN?

Hi did you played the true route and ending?

I used this walkthrough http://seiya-saiga.com/game/moonstone/asisyo.html
According to it there are just four True Routes. I recorded two True routes corresponding to more mature characters. Boycotting loli routes.

Unfortunately, everyone I know despises machine translation, so there aren't channels like mine.
I record videos mostly for myself to watch them later in transport or on a sofa with a tablet, so it's done the way I'd want it to watch - huge structure-based videos, not hundreds of 15 minutes cuts like everyone else does.
I'm subscribed to two channels that post first minutes of older visual novels, but, of course, without translation:
https://www.youtube.com/channel/UCA7jwHjldC10wDiyuY1Rfcw
https://www.youtube.com/channel/UCGo-h-tEzAb2xEvgSpZH3bA

So, what happens in the True Endings? Do they explain what's going on? Ryuu's True Ending didn't make sense and lacked any sort of explanation. Why did he vanish? What about the other True Routes you've done (the two mature heroines)? Whtt happened in them? Hope to hear from you soon. Also, can you check the MinDead Blood comment section? I've left two recent comments for you, I believe.

Routes are organized here in such manner that they branch off the main story with the earliest one ending in the middle of the story and the True Ryuu route taking us the furthest in the story. Thus, all the routes apart of true one are finished abruptly with some heroine and feel unsatisfactory for not revealing anything.
I don't remember Ryuu vanishing in the True route. He learns the identity of killer in the past and the present, and tries to kill himself, but is saved by Fuyuka. As game finishes, he continues to live on unable to forgive himself.

So, at the end of the True Route, Ryu continues to live on, unable to forgive himself, after Fuyuka saves him? He's still alive? Who is thr killer? Wait, what about the other heroines? Are they okay in the True Route? They're not dead? Hope to hear from you soon.

There are two killers, actually. Protagonist is the killer in the past and Fuyuka is the killer in the present. She was recreating events from the book. In the end all the sisters but Fuyuka disappear one after another unless we specifically enter their endings. Ryu survives the suicide attempt, but he is basically left alone and guilty for murders in the past, so it's a very sad ending.

Wait, all the sisters, except Fuyuka, disappear one after another unless we specifically enter their endings? Why are they disappearing though? Someone killing them or something? Do we know what happen to them? Ryu is alive, but he's left all alone and guilty for his past murders, so yeah, it's sad for everyone.

Basically, in the end we face some crisis points and need to choose whether to go help a certain girl or go to other girls. This way we either go into certain girl's End or go on with the story, and this way lose all the links with the girl. Judging from the nature of crisis, ignored girls are probably dead in the end.