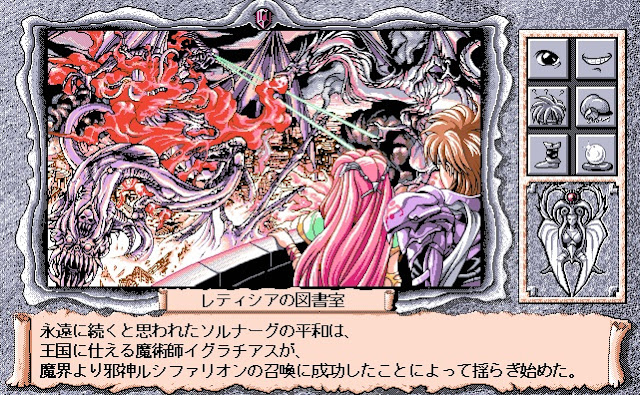 Foreword: I've played it in on a whim. Looked into synopsis and just could not believe that Cocktail Soft would do a full-scale fantasy eroge with rapist hero as protagonist. Fortunately, my belief in this old company prevailed. 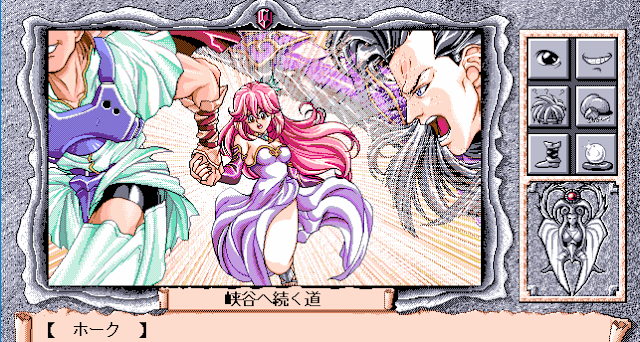 Summary: Vagnard kingdom practices "True religion" to live without restricting own desires, so its capital got known as "Demon City". "Blue moon" cult has established believers base of over 300 people and king sets us, sex fighter Yuaranas, on a mission to turn five gurus of the cult back into "True religion".

Comments of Difficulty: Story is one straight line, so I only had difficulties while searching for the town bard without a clue where to look for - first time i needed to look at the square fountain to find him... and the second time to talk to fountain... that was beyond logic. Another narrow point was the puzzle to set six books in the right order based on someone's words much earlier. Had to shamelessly google solution. 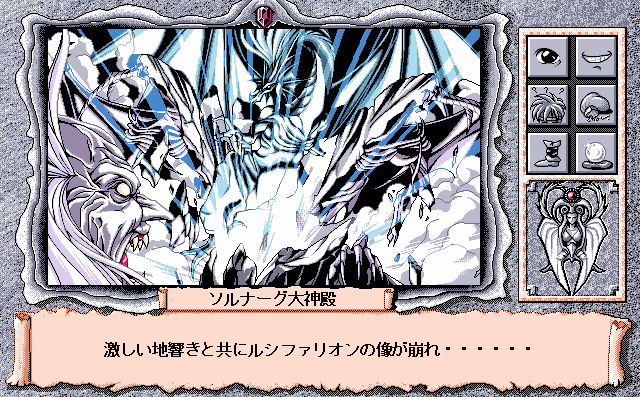 Structure: There are four main chapters, and also introduction and ending chapters that go do not fall in the chapters division.


Story: I don't really know how to write without spoilers. I read all amaterasu reviews, but they all look alike and can be applied almost to any game since they dont tackle story in any manner at all. I prefer to reveal the story, create tension and keep silent about resolution. So we get quest from the king and gather information about the cult's next meeting. We get to this forest meeting, but get uncovered. In a short assault scene we evade throwing knives attack and even manage wound one of hooded figures in the arm before fleeing.

In the daytime a local dancer girl shows up with an arm wound. From her we get to know the first crumbles of information on a 3000-year old mystery that surrounds the cult. Then we witness how local nun teaches city children of "love and purity" and thus uncover her involvement. Local blacksmith is brought a knife for repair and we identify the night assault throwing knife in this weapon. Knight captain girl admits it's her knife when we say we found it on the town square and thus uncover herself as cult follower. After that the story turns upside down with a lot of gore, treachery and total shift of objectives and enemies (even more than once). The ending is classy for a fantasy and satisfying. 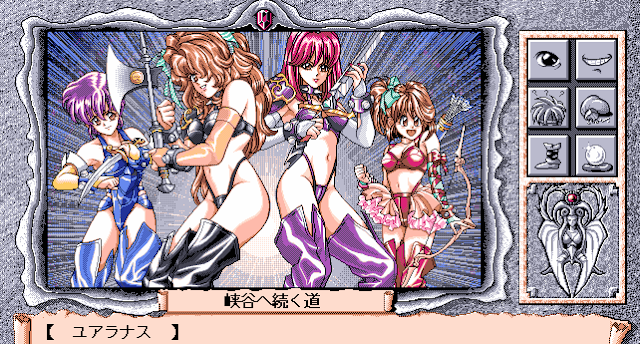 Characters summary: Characters are multiple and very cute, but aren't particularly deep, so the only person I can really talk about is protagonist. 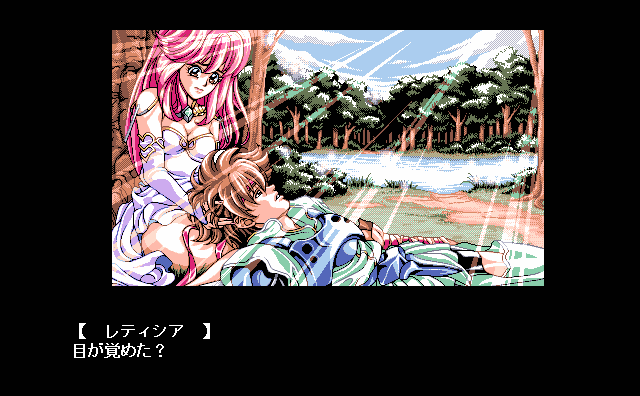 Protagonist: Absolutely fabulous. I don't think I've ever met such  protagonist. He's been brought up as a sex fighter since childhood. As a result he's not interested in women at all. Majority of girl characters openly say let's make love before they say hello in this city of vice and every time protagonist ignores them. The most irritating is his 31st wife, but he ain't wasting forces on her, just handing her vibrator. Whenever it's possible with other girls, he also tries not to get involved much and actual coitus happened like only couple times. I just liked it that hero had a real aim to get princess as wife and rule kingdom. Very practical aim. For that he needed to become an aristocrat. And for that he undertook king's quest to convert cultists back to original religion. His actions were always weighted and logical, despite the seemingly stupid look on some CG. His actions can be considered rape, but not a single one was for pleasure. Each time there was a concrete aim driving him closer to fulfilling important political mission. So rape under necessity won't be considered an ordinary rape for me later on.

Sexual Content: First time you search for an astronomy book in the library and the stupid librarian girl placed all books by matched color and rally hindered your searches begging for sex, so after some 10 rounds of search had to give up - and the needed book was shortly found afterwards. Second time you need to go to the night meeting in the forest and your wife just would not let you go, so reluctantly had to please her and move out. The next time you gathered a lot of evidence stating that dancer girl was in the cult but she kept rejecting anything, so needed to use interrogation techniques on her. Same goes for the fourth time - you get substantial evidence of the church nun participation in the cult and some interrogation techniques (with the use of special aphrodisiac drink) had to be applied. Next time girl thief stole our family sword and did not want to give it back, only some stimulation changed her mind. And then the knight girl, but only after we've found satisfactory evidence of her participation. Finally there's the princess and this is the only time of emotional treatment since memories of their childhood acquaintance wake up. There are also couple scenes where H-scenes are witnessed.

Affection for the Characters: Low. The cutest characters show up only in several scenes and princess is not really lovable.


CG Score: 9/10. CG aren't bad. I just never expected this kind of quality. They are of low resolution, but so were the devices at that time. I'm a big fan of quality gore scenes since they support atmosphere of the work immensely and here there was a lot of impressive content. 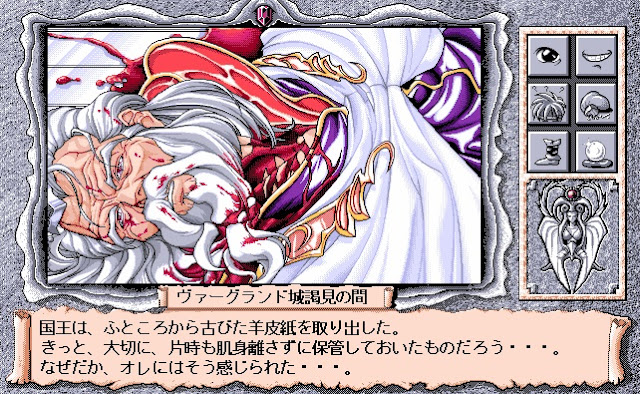 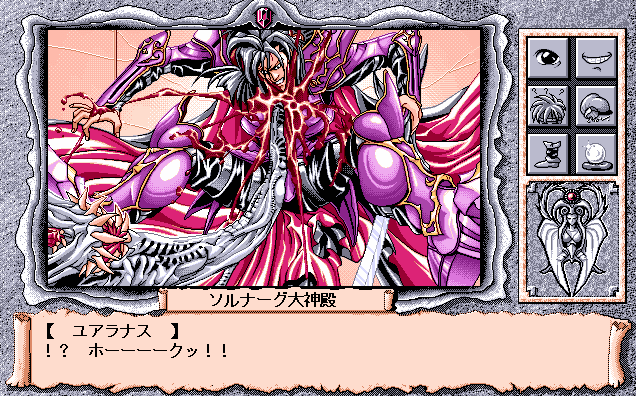 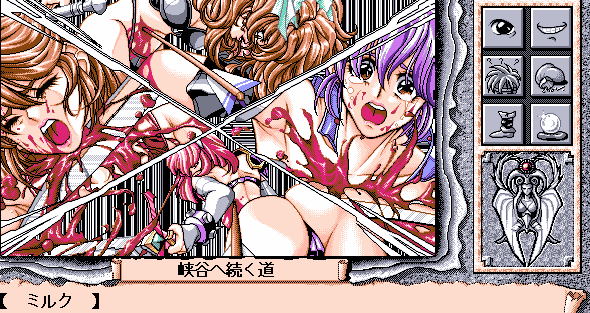 Sound Score: At first two same melodies kept sounding getting  irritating, but at final chapter there was an abundance of great music. Final impression is what only counts, right.

Conclusion: Cocktail Soft quite often present provocative settings, but the story each time dominated. The mids of the game may be repetitive with the same locations visited over and over for clues, but overall the tempo is good, probably thanks to good systems - there are just three commonly used icons - look, think, talk and quite seldom there is an option of what to look at or think/talk about. Usually command is applied to the whole screen - that cuts repetition in half. I also greatly appreciated that the game is totally serious without stupid jokes. A quality fantasy work with some really memorable moments and great charm. 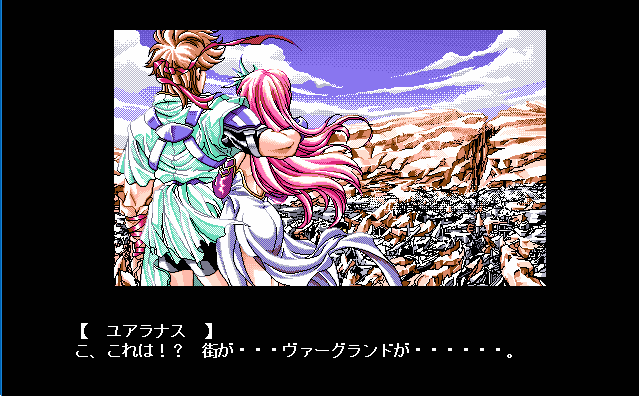