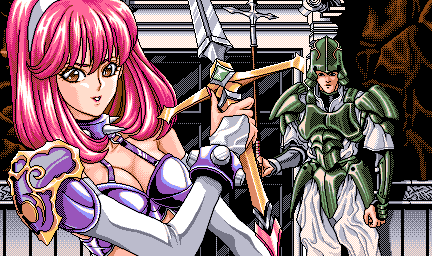 Year 1993 was... strange. Most of praised games of the year were blocked by me due to nukige nature of the games. Those games include Kawarazaki-ke no Ichizoku, Rance 4, Viper series, NOVA, Ayumi-chan Monogatari, Kindan no Ketsuzoku. And a lot of quality representatives that I don't even want to mention here are purest brainless nukige. It really looked to me as if the world got mad after the strict censorship of 1992. The number of VNs that made into my list slightly decreased from 4.08 in 1992 to 3.75 in 1993 due to increased nukige tendency.


The notable features of year 1993 included:
- Hard disks come as an early substitute for FDD, e.g. Rance 4 was released only for hard disks.
- Games featuring 2 or even 3 screen CG scrolling got frequent
- Multiple games heavily introduced animation to look like TV anime
- Several works included percentage of watched CG and it stimulated pursue of CG rather than developing story
- As games increase in volume they start to feel uncomfortable withing Command selection formula. Command selection is generally simplified even further to such extremes as three icons or 2-3 unique variants for each selection, sometimes merging with contemporary ADV system.

Let's try and count what masterpiece level games we ended up with in 1993.

1. Bunretsu Shugoshin Twinkle Star
2. Can Can Bunny Extra
3. Cosmology of Kyoto
4. Demon City
5. HHG Heart Heat Girls
6. Kawarazaki-ke no Ichizoku
7. Nova
8. Marine Philt
9. Ooedo Tantei Kamiya Ukyou Vol. 2
10. Prostudent G
11. Rance IV - Kyoudan no Isan -
12. Words Worth
13. Zoku Youjuu Senki -Suna no Mokushiroku-
So if we talk about which game had the biggest impact on industry - it would be Can Can Bunny Extra. From this work the Swatty goddess became a meme and the game is the closest thing to a contemporary high quality charage. But I just refuse to give this nampa game the credit of being the best VN of 1993.
3x3 Eyes ~Sanjiyan Henjou~ is a nice gore game just to my taste, but it has lots of shortcomings.
Horror games like Marine Philt are one-time games that are only good while playing.
Bunretsu Shugoshin Twinkle Star is mostly fun only for first two chapters.
Cosmology of Kyoto is a gem, but it's too different from anything else to participate in the general race.
Prostudent G is a bakage that I refuse to give credit.
Words Worth is a great game, but it would appeal only to a very small percentage of RPG fans.
H.H.G.: Heart Heat Girls is an amazing story but it's from a relatively unknown developer Cat's Pro and its production values are greatly lacking. Dark palette, average character design and CG quality just can't be the BEST game of 1993.
So why not Demon City? It's quite a borderline game, but so is year 1993. It's from the same Cocktail Soft company that made most acclaimed Can Can Bunny Extra the same year, so it's only fair. Demon City has fantastic production values, very unorthodox setting, cool original protagonist, great shifting story. It's persistent, fun and never boring. It made the biggest impression on me and that's what counts.