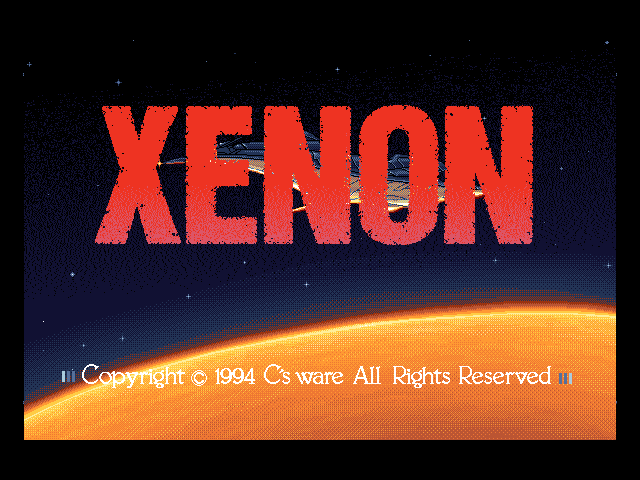 Foreword: This is Keno-san's scenario. He did not have much experience when we was thrown to produce scenario of the game that we know as Love Potion in two months time. Critics buried the game and that's why there was much more care in producing next game scenario - that was DESIRE, the game that I can't praise enough. The next year Keno wrote scenario for EVE burst error and on the wave of popularity move to legendary Elf company where he kept working on EVE franchise and created another masterpiece YU-NO and then left for Abel company. He created a lot of wonderful scenarios after that but we're interested in Xenon ~Mugen no Shitai~ scenario. It was developed after DESIRE but prior to EVE. So it was the golden age for Keno and he was experimenting a lot, trying to further develop the already complex DESIRE structure. This resulted in Xenon -Phantom Limbs-.

Synopsis: Kōji, a Japanese high school student, experiences strange, recurrent life-like dreams. He finds himself in a space station inhabited by beautiful young women. As he tries to explore the dream realm he wakes up. His teacher, intrigued by his account of the bizarre adventure, urges him to travel back to the space station in his dream and report his discoveries to her. Eventually Kōji realizes that his dream and reality are tightly connected, and finds himself compelled to avert a grave danger.

Structure: Three routes with 3rd route to have four branches for different heroines, then there is an extra small kinetic route or something like that.

Difficulty: Moderate. Flags are obscure so best to use guide.

Rating comments: Game is quite difficult to evaluate since there are two worlds with own sets of characters and there are even two protagonists (actually, even three) of varying charm. Not all the characters are cute, some look good only at CG. Game has great text but is lacking in some fields. 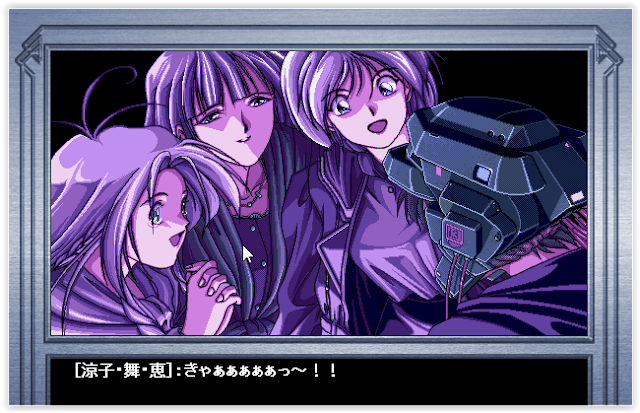 Protagonist: Quite and ordinary japanese student on one hand and much cooler The Greatest and Toughest Space Pirate, Genius and Universe Champion on the other hand. I liked the latter much more!

Megumi - real world girl, your lover and her papa is medical center sponsor 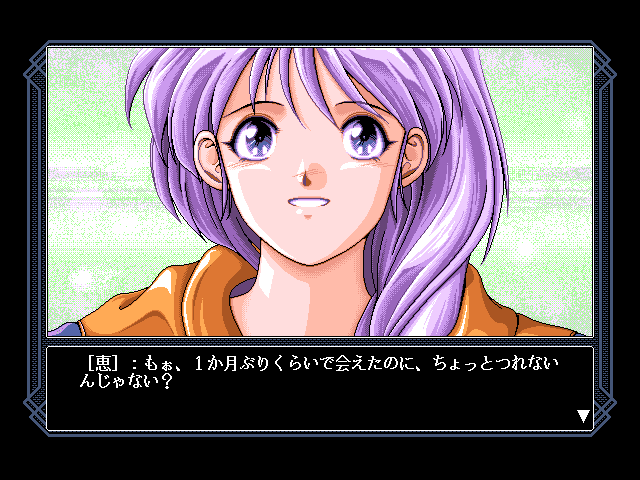 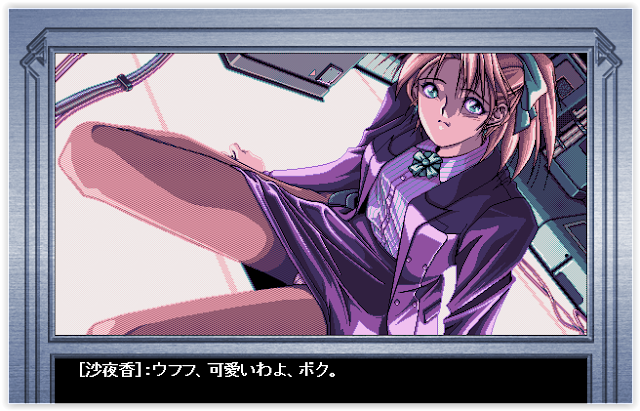 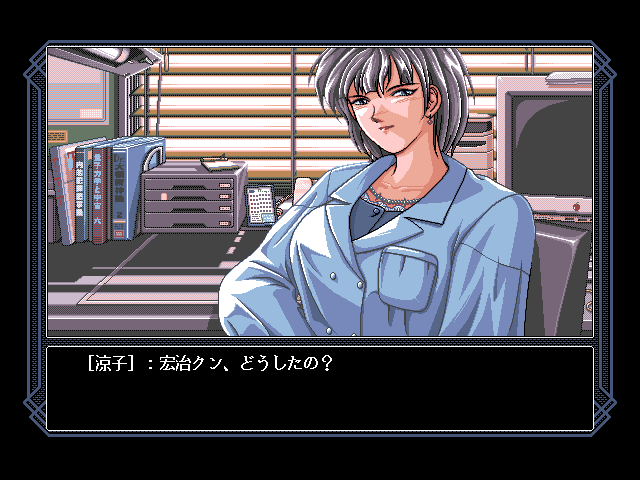 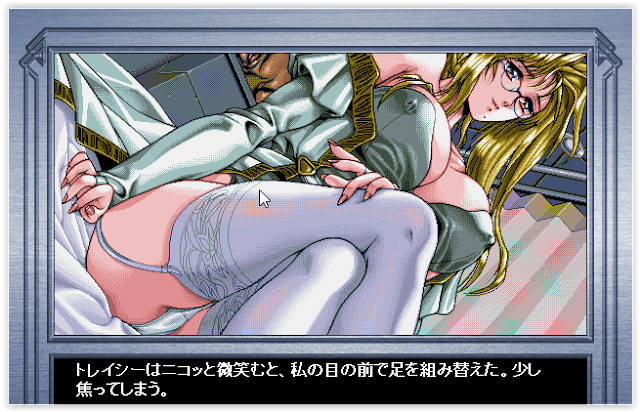 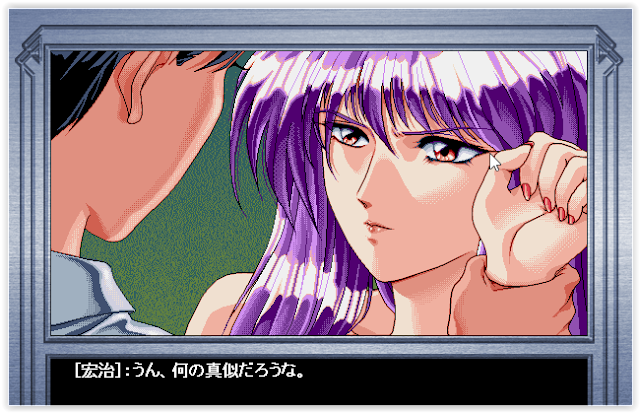 It's not easy to tell this game's story without spoilers. And this game's charm is only due to this mindfuck state of mind in projects constantly. If I tell the contents of 3rd route, game will be stripped of half of its charm. So I'll only roughly retell first route. Game introduction shows Kouji being taken out of hypnosis state by psychiatrist Ryouko-sensei. And this scene is repeated like 10 times throughout the whole game and it's great for the atmosphere - sometimes it's real awakening, sometimes it's just a dream. After introduction we find ourselves in some hospital chamber, bump in some weird looking (some exposing uniform) girl then discover naked girl wired to some cryogenic coffin.

After that Kouji wakes up in the real world (I'll call it real for now although it's not that simple). He's questioned by Ryouko-sensei about what he remembered from the dream. Outside of the room he is greeted by Megumi, who claims to be his girlfriend and lover. There is also some strict government official lady Sayaka who does not let us go into computer room. And finally there is Mai girl who is very worried about Kouji condition. And from there it goes chaotic. This real world is constantly shifting with the dream world where there are four different space ship crew girls await - mechanic Ranfa, researcher Fal, captain assistant Tracy and sleeping beauty Bianca in cryogenic room (actually, it's the different sleeping girl, first one in the dream was actually Fal).

So Kouji gets thrown from one world to another, sometimes without warning - we share consciousness and even items while there, so basically we've found some media disk in one world and could find the device to play it only in another world. Furthermore, we hear voice of some man from time to time. In real world we try to know more about the hypnosis treatment we undergo and to get to the computer room. In the dream world there is even more action - we investigate the sleeping beauties, try to find out about our identity and once even blow the ship.

As for identity - that's another interesting story. Some ancient ruins were found on some planet and first research team was sent to investigate the ruins. Noone survived. Second research team was sent to investigate the fate of the first research team and.... noone survived, except Kouji. So everyone urges us to remember anything but in vain. Then there is the sleeping beauty Bianca who eventually wakes up and blames Kouji of killing the whole first and second research teams. Then there are reports that actually Kouji was not listed neither in 1st, nor in 2nd research team... So the main question of the game is WHAT am I? That's just an amazing start, but actually game does not live up to this fantastic start to the end.

First chapter ends when Megumi gets kidnapped and as we rush to rescue her we get caught by Ryouko-sensei and get another charge from the mind machine that burns 2000-30000 of brain fibers in Kouji's brain and in the dream world Kouji steals the shuttle and flies to the Eriteia planet with ancient ruins to meet with Ranfa who promises to give answers to all the questions - and we get first chapter end while man and woman promise each other to become new Adam and Eve while staying on some wasteland.

That is a fantastic first chapter. But then starts the second chapter and... Kouji just cries off the bat - I'm the Great Space Pirate, Genius and Champion of the Universe! So the beginning of the chapter feels like a comedy with most of the real world girls trying to calm him down and treat his craziness. But the sad part here that this is real space pirate who changed consciousness with Kouji and came 6000 years from the future. He's cool, reserved and he first persuades Rouko-sensei into being his slave, then with her hands does the same with Ryouko-sensei's sister Mami, then proposes to his girlfriend Megumi to become his wife, actually, slave wife! And together they manage to confront Sayaka successfully after some violent scene and burning 30k more of Kouji's brain vibers. 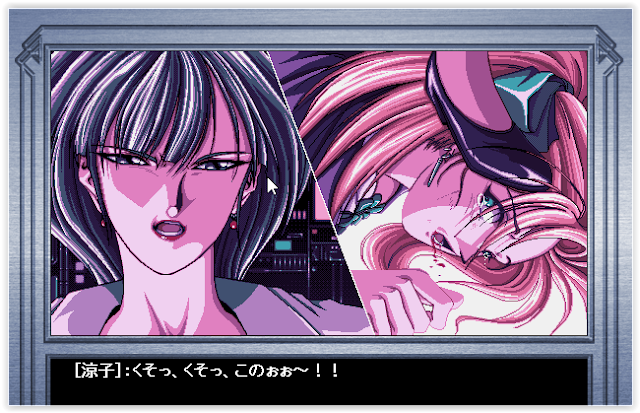 Third route finally gives some answers as we play as real-life Kouji on the space ship. Fourth route is just ero-bonus content, sadly. So what we have is awesome space mystery that gradually looses its mystery and turns into a set of ero-scenes.

Theme: The recurring theme of the game is that of the dream. What is reality? Is it possible to percieve what's real and what's not? Game tells us a definite - impossible to perceive. The Confucius symbol of butterfly in human's dream is used a lot. Mai directly asks Kouji to be a butterfly in her dream. Since dream is as important as reality it's best to live a full life and take full efforts even in dreams.

CG: There are very few event CG in this game and those few that exist are of bland palette.

Sound: Actually, it was to my liking. Especially the theme of Greatest Space Pirate was awesome. It's some heroic march so when it starts merrily, you always know that Kouji now has a different personality. And I totally adored the voicing of Rafna... she's the youngest character and her seiyu just did a miracle here with the special voice and intonations. And Rafna got the cutest character design and CGs on top of that.

Overall comments: Scenario is second to none and text is really good. Game mechanics are finally driven from commands selection to usual ADV type, so story can be enjoyed to a bigger extent. I can't recommend this game to everyone since it does not reach the level of other Mr. Keno's masterpieces. But I can totally recommend this game if you like the space mindfuck mystery setting or if like good writing. Personally, I adore Vladimir Nabokov's books. Of course he has well known masterpieces like "Lolita", but I can take any of his novels and open them at any part and just start reading - the text is so good, complex, multi-level and rich that I get great pleasure just from reading a couple of pages. The same goes to this work. The aftertaste might not be the best, but while you read there's much pleasure in the process.