Foreword: Loving the series. Nothing can stop me exploring it further. 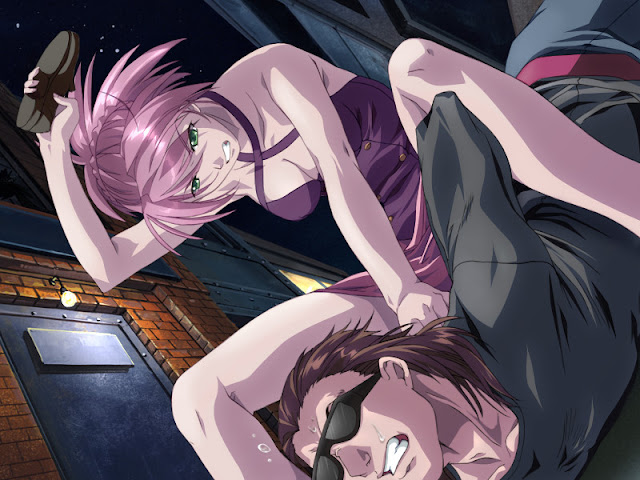 Synopsis: Kojirou, a private detective, meets a girl when he is on his way back to his office. Once she finds him a detective, she brings him an offer. "Please find my memories...." That very moment, a man gets off out of a car and takes her away.... He finds out her identity and some keywords.... He is led to a certain place.... Marina, an agent of an information research group, finds a boy who is about to fall off at the top of a building. She tries to stop him but he commits suicide.... There is a tattoo of a bee on his palm. She starts to investigate his death but she is pursued by the police.... Blackout, terrorism, a mysterious medical company, a tattoo of a bee and a mysterious girl.... Will Kojirou and Marina be able to find out the fact? 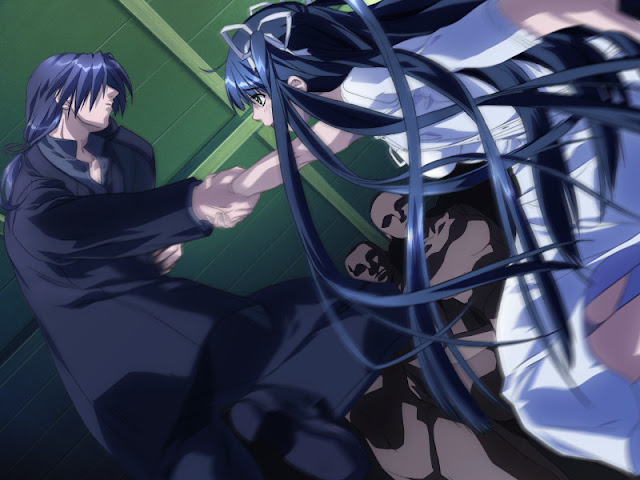 A difficult game for evaluation. I started it with great irritation. First of all, I absolutely detest graphics. Character designs are absolutely barbarically destroyed, and nothing can justify it. Why Yoshino Keiko, why? My first reaction was to boycott this game overall. And even when curiosity to know the story won, each old character's initial appearance like Katsuragi Yayoi or Himuro Kyouko fired up rage flames. How can already done and perfected designs be distorted like that? There is not even a single good CG in the game. It was a failure from the start. Second reason for irritation was R18 rating. But as I learned that initial version was ps2 all age release, I felt a big relief. Add any scenes you want on top of all age release, those scenes will be alien and should be overall skipped as a clumsy way to release a game for PC, nothing personal, just business. 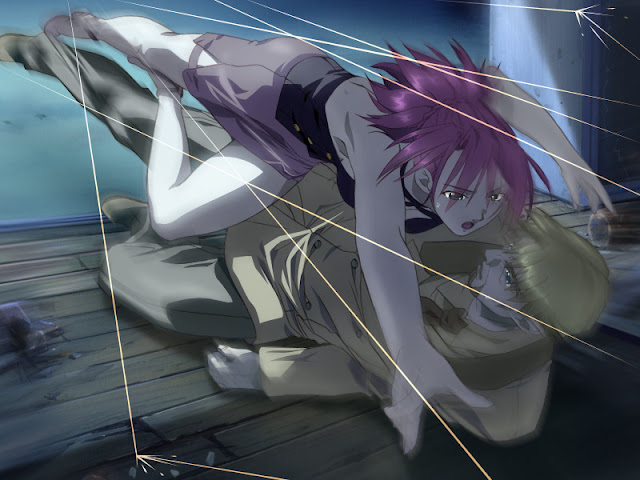 Let's move to more pleasant features. Protagonists are same cool as always except for the destroyed looks. Kojiroh is more of a think tank and attentive observer while Marina does more footwork and is involved into more drama within police and other secret government services. What's especially pleasant is to see two protagonists finally cooperate and share information. Due to various reasons they acted in isolation in previous games. Integrity of protagonists is saved. For example, I was worried they'd treat each other as romantic interest, but writer did a great job preserving archetypes. 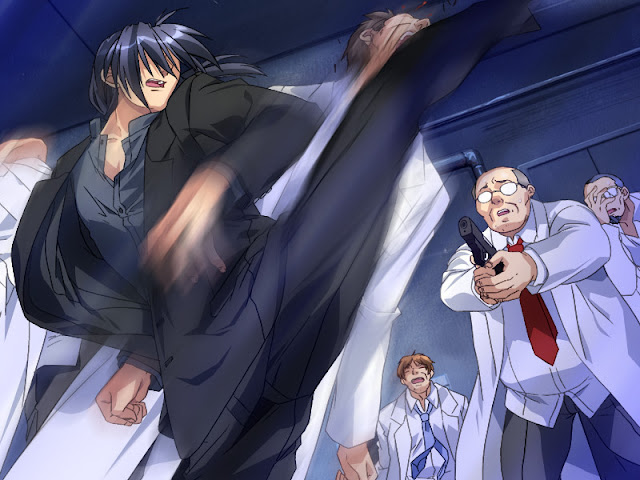 Let's touch story then. Summary gives a good outline. I'd only add a strange bank robbery of a dozen camouflaged people. Kojiroh and Marina try to follow different leads of numerous strange incidents as they pile up. I absolutely love what Uchikoshi Koutarou did here. Mystery is actually fantastically well done with great detail and suspense. But there are two small things that influence story score. First, New Generation has definite Eve: The Fatal Attraction and not Eve: Burst Error influence. Humor and relations between characters from original are scrapped. To focus on mystery even usually funny relations with Himuro Kyouko are removed completely so that she appears only for a short scene in the game. By the way, it's very weird that the is voiced by the same seiyu, but her speech individuality is totally gone, loved old Himuro voicing much more. The second disadvantage in the story for me is that writer failed to stay within scientific reality borders. All the suspense of the game is created by utilizing not so scientific categories like teleportation and time distortion. Writer desperately tries to give them scientific explanation and fit them in the reality world picture, but readers see it. There have been four games before this one each written by different people, and not a single one of brought such dire interventions. If New Generation's novelty is about introducing these anti-scientific elements, then I don't like this direction. It basically means paying no respect to the series concept and work of previous scenario writers.

Gameplay deserves a special mention. Command choice is still here, but at a greatly reduced form, thankfully. There are just three commands - examine, talk, other (which usually either means think or act). Moreover, there is much less aimless walking and clicking in search of "something". Basically, if place has some development involved, then go command disappears till everything is finished here. And it works both ways - if there is is go command active, then there's nothing interesting going on at this spot. Another great thing is that there is a linear story and just one ending. It means a lot for command selection game. Finding additional endings takes insane amount of time and effort for such game. 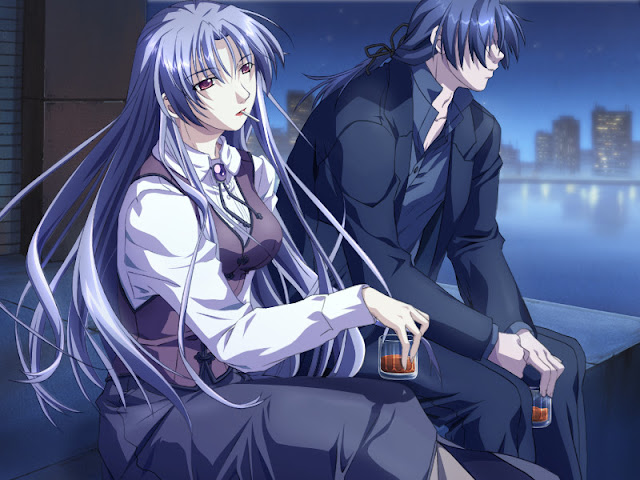 So I consider game to be worthy, but due to graphics, personal relations scrapping and supernatural elements one of the weakest episode in the series inferior even to Final Attraction. But game is still true to the concept, and thanks to gameplay simplification it's easy to sample for new players fond of mystery. But I would not want to see the series going in direction of Final Attraction - New Generation, so I'm really happy to observe series rebirth with Eve: Rebirth Terror that I place great hopes on. 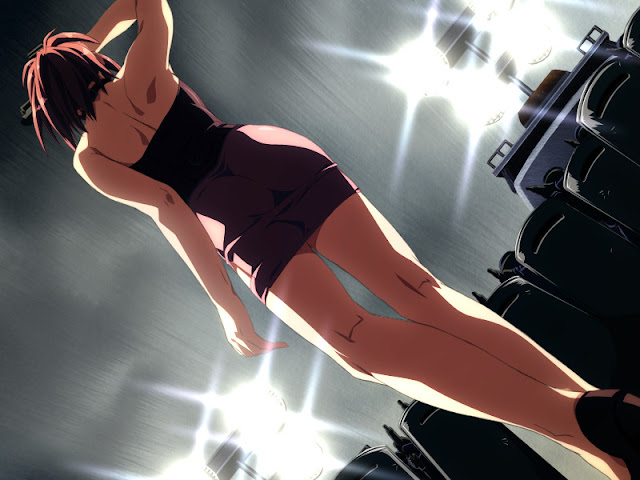 So, this game is decent then? Not as good as the ones that come before it?

It's good as a mystery story for newcomers, no real complaints to scenario.
Oldfags like me might not like 1. Superficial elements 2. Character design 3. Character interaction
So it feels like the weakest game in the series for me.