VN of the Month November 2001 - Nijuubako 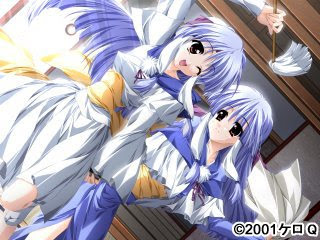 Kazoku Keikaku , Daiakuji and Nijuubako make the masterpieces of the month, but the winner is Nijuubako

Quick question: I know this post are the month the games came out, have you actually played all of them? reading your BLUE text comment seem like you played all or most of them?

And if so you played Daiakuji before? that was another highlight from my youth .

PS: Summer anime almost here AKA YUNO anime soon cause my friend are telling (who played the VN) to get excited, a good anime staff in on it i heard

I used to play everything only during first youtube channel since I needed to make videos of everything.
Since then two of my important visual novel sources have been cut, and I have to do with the rest somehow.
Blue text is usually retelling of Japanese reviews, that's why it's so short and dry.
Playing 1-2 visual novel per reviewed month is all I can afford time-wise with a pace of new publication every two days. Never played Daiakuji. I avoid RPG for now as they require more time and dedication. Also need at least interface translation to feel relatively comfortable in non-translated RPG.